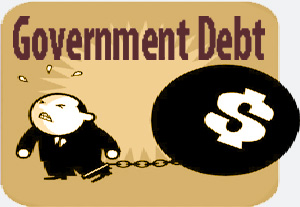 Most Governments are Guilty of Slavery
One of the most serious social problems in the world today is government debt. Most of this debt is legally owed by individuals who never agreed to take on this debt obligation, but it was imposed on them by their governments. Such government debt ought to be viewed as a fundamental violation of human rights. Most countries that are members of the United Nations engage in this form of slavery that is more subtle, but no less pernicious and abhorrent than the physical slavery so publicly decried.

Article 4 of the UN International Declaration of Human Rights states:

No one shall be held in slavery or servitude; slavery and the slave trade shall be prohibited in all their forms.

The Merriam-Webster Dictionary defines slavery as:

This definition of slavery is not limited physical possession or ownership over another person, but any type of domination that controls a person, or uses them for another’s ends. This practice violates Immanuel Kant’s Categorical Imperative that human beings ought to be treated as end-in-themselves, and not as a means to someone else’s ends.

Borrowing money obligates the borrower to the lender who earns a percentage of the borrower’s labor in exchange for the loan. However, when an individual borrows money from another individual and signs a contract, the loan is voluntary.In other words, the borrower agrees to put himself in the service of another in exchange for capital that might enable him to live in a house immediately or begin a business. In this case, the borrower considers the loan to aid his own pursuit of happiness, and the borrower does not subject another person to someone else’s ends. If the borrower default’s on his loan, he bears the consequences of his own actions, but does not harm others.However, when a person, or social institution like a government, borrows money that another person is forced to repay, the indebtedness incurred by the third party is involuntary. This is a form of slavery. Unfortunately, most modern states engage in this unprincipled practice that violates fundamental human rights and liberty. When the United States borrows money that obligates payment from present and future taxpayers not party to the loan, it violates the fundamental principle of the Declaration of Independence, the right to life, liberty, and the pursuit of happiness.

The United States Reinstituted Slavery with the 16th Amendment
Many people will attempt to rationalize moral justifications for US debt by saying that U.S. citizens voted for this debt through their representative government. This is mere rhetoric. When confronted with the October 2008 bank bailout of $700 million, the majority of US citizens asked their representatives to vote against the measure. To get around this process, the sponsors of the bill bought the votes of representatives originally opposed to the bill by tacking on all kinds of things from mandatory mental health insurance to support for a manufacturer of wood arrows. This process itself violated the concept of single subject legislation that was intended by the framers of the U.S. Constitution.

The original finance system for the U.S. government was based on tariffs and excise taxes. This could also apply to sales taxes, because sales taxes do not directly tax the labor of a person or property he already owns. The concept behind the protection of property and the right to the fruits of one’s labor that the Founders held, is that the government should not be able to implement any scheme that would deprive a person of the life, liberty, and property that he already owns. Sales taxes can be considered voluntary because each person has a choice of whether to buy a product and allow a portion of that purchase price to go to the government as a tax. Such a purchase does not place a burden on a third party and violate the Categorical Imperative.

Many types of governments, from kings, to dictators, to democracies impose involuntary taxes. The United States made involuntary taxes on individuals legal with the passage of the 16th Amendment in 1913. This amendment fundamentally undermined the original purpose of the U.S. Constitution. The bill was designed by bankers who wanted to lend to governments, because they had the power to use force to extract taxes and repay the loans. Within three years after the passage of this amendment, the U.S. budget for a year became larger than all previous years since 1789 combined—and this included the cost of the Civil War.

Getting Addicted
It did not take long for the US government to get addicted to this new found source of slave dollars. During World War I, Woodrow Wilson, the same president that signed the 16th Amendment that sold US citizens into a new form of slavery, agreed to enter World War I at the behest of J.P. Morgan and other banks that had over a billion dollars of loans to European countries embroiled in war. J.P. Morgan was guaranteed repayment of the debt by U.S. taxpayers, regardless whether European countries defaulted or not. The bank bailout in 2008 was another example of these same forces at work.

After WWI, states and corporations lobbied for money from this huge pool of tax dollars that just seemed to be lying around for the taking. States started taking federal money for highways after the family automobile became affordable. Calvin Coolidge bankrolled lots of corporations and is famous for his statement “the business of government is business.” Then F.D.R. began handing out the money to organizations like the WPA that would employee people out of work by building infrastructure and national parks. After a few decades, this feeding frenzy came from all corners of society to the point where today it has been carved into national consciousness as an addiction. But this addiction is based on the principle of slavery.

Greece as a Slave to the European Union
There are indeed few state governments in the modern world that have not succumbed to the temptation to borrow money from banks and drinking the same Kool-Aid as the United States. The entire European Monetary Union was based on a common currency that enabled bankers to entice member governments with loans they could not repay. In countries like Greece, individual citizens did not object as long as paychecks kept coming at higher levels than the market value of work actually performed.

But loans are contracts, and they need to be repaid. Eventually Greece had borrowed more than it could repay with the encouragement of banks and EU bureaucrats with silver tongues. The citizens revolted. Why? Because they did not feel they had personally agreed to this debt. In this sense it is rightful indignation, because their debt was involuntary. Individual Greek citizens had become unwitting slaves to a system they did not create not fully understand.

The Immorality of Involuntary Government Debt
The lesson of the last 100 years is that modern governments have been irresponsible and immoral. Even some of the most ardent members of the United Nations continue to blatantly violate the 4th Article of the UN Declaration of Human Rights, including the United States. By violating the fundamental principle of not treating human beings as ends in themselves but as a means to a governments ends, citizens are exploited rather than protected, and many people are suffering under the staggering weight of national debt.

Does this mean all government borrowing is immoral?
Not necessarily. The sale of government bonds is a voluntary transaction between individual bond buyers, and governments. Typically, bonds are purchased for infrastructure like roads, builds, or sewers that will be repaid by collecting fees for use. Individuals do not have to use these services, but their use is generally voluntary and considered a convenience. In fact towns and cities often attract people to live in their jurisdictions because they provide high quality services at a reasonable price. Further, these services are usually subject to the market pressures that keep them efficient and competitive because people are free to move to other cities if they are not competitive.

In Summary
Government borrowing that is based on coerced taxation is immoral, a form of slavery, and a violation of Article 4 of the UN International Declaration on Human Rights. It violates the core concept that individuals should be free to pursue life, liberty, and happiness. It is a policy that treats innocent people as a means to someone else’s ends and uses coercive force to accomplish it. It should be outlawed and view with similar abhorrence to slavery, because it is a form of slavery.

Many nations today are teetering with debt that is oppressing citizens, in some cases with greater oppression than physical slaves that had benevolent masters. Much of this debt is caused by shrewd bankers that view governments as easy targets. It is also caused by citizens who have lived as dependents on others and never learned principles economic self-determination from parents or schools.

However, this principle of involuntary debt, like the principle of gravity has consequences. Walking off a physical cliff can lead to physical death, and walking off a fiscal cliff can lead to fiscal death. A principle is a principle, and since the time of Aristotle we have known that good Constitutions and laws mark the boundaries of cliffs. One such law, or Constitutional requirement that can keep human societies free and prosperous is the prohibition of coerced taxation for government debt, that would eliminate the possibility of such fiscal cliffs.