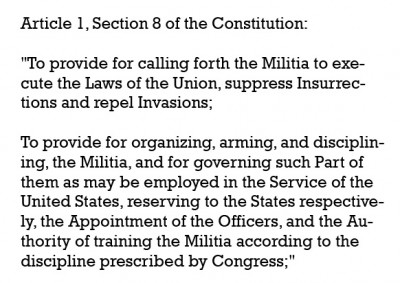 Article 1, Section 8, of the U.S. Constitution forbids the existence of any federal agency like the BATF, FBI, TSA, or Homeland Security which trains military or policing activity at the federal level. It clearly says that the individual states should have militias that the Federal Government can call up, but it does not provide the federal government with the power to create militias or police forces. To grant such power would be a clear violation of necessary checks and balances between the states and the federal government.

The Federal government was to have military forces, but they were not to be deployed domestically. They were to defend the nation against an invasion, protect our embassies, and protect national property, but nowhere were they given authority to police citizens. In the language and philosophy of the U.S. Constitution, “national police” would be an oxymoron.

We witnessed the Bureau of Alcohol, Firearms, and Tobacco (BATF) attack the Branch Davidian compound on April 19, 1993, in which 76 men, women, and children died in an ensuing fire. The local sheriff knew David Koresh, the Branch Davidian leader, and was in a superior position to act with compassion and an appropriate response than flown-in national agents. The US founders knew that state militias and local police forces were better suited to provide a just and measured response than federal forces because they could better be held accountable by the citizens. The videotape of the March 1991 Rodney King beating had an example that had an impact on the behavior of the L.A. police, because that same police department had to put its policement on the same streets the next day. But the BATF never reformed, and possibly set itself up for the Oklahoma City building bombing, because of their impersonal relationship and the inappropriate response that delegitimized their authority in the eyes of many average citizens.

Federal agencies like the FBI that are allowed to train on military bases like Quantico and then are given authority to seize and arrest U.S. citizens at gunpoint are clearly in violation of the U.S. Constitution, and any oath agents may take to uphold the Constitution seem merely ceremonial in this respect. Federal agencies like the FBI, Homeland Security, the TSA serve as federal police forces or even as domestic standing armies. The Second Amendment to the U.S. Constitution not only guarantees the rights of individual citizens to bear arms but emphasizes the importance of state militias to be well trained for protecting the freedom of the states. Thomas Jefferson even objected to the concept of federal standing armies, expecting that the federal government would call up state militias when national defense was necessary.

The FBI has a poor track record of actual arrests that turn into convictions, and many of those convicted were caught in entrapment schemes designed by FBI staffers. When local citizens, or even FBI field offices attempt to affect FBI policy from the bottom up, there is little responsiveness because of the nature of its top-down legal authority. Thus, when Minnesota FBI agents warned of suspicious activities by Zacarias Moussaoui, who was learning to fly planes but not land them, and an Arizona businessman that witnessed similar activity at an Arizona airport, the warnings fell on deaf ears or landed in a pile of paper on a Washington desk, because national FBI leaders had little personal incentive to act on tips from citizens or field agents. The very bureaucratic structure and human incentives built into agency rules prevented this impersonal federal agency from performing the tasks it was created and funded for. The FBI has a legitimate role in “investigation,” but apprehension should be the job of local police and not FBI “crisis management assets.” The same principle can apply to other agencies.

In September 2012, grave concern was expressed on many websites about federal agencies stockpiling ammunition that could be used against citizens.

On Friday the government stated that the hollow point bullets it has procured are “standard issue” and that they are used to train security agents used by each of the various federal agencies.

However, according to retired Maj. Gen. Jerry Curry, a decorated Army war veteran, the Feds’ explanation about the bullets fails to pass the smell test.-Pakalert Press

The explanation that these hollow point bullets were needed for training was less than convincing to the military officer cited above, but the real issue is why federal agencies need their own security. In Washington, D.C., the capitol police are charged with policing the capitol. The founders intended local police and state militias would provide police protection for federal buildings and agencies–there is no constitutional authority for such agencies to procur weapons or train security forces themselves.This for for good reason, it is a fundamental conflict of interest for any individual or group to both have the power to create laws or policies and to enforce them.

Federal Agencies are Factional Interests that Must be Checked

James Madison wrote in Federalist 10 that we take for granted that it is a conflict of interest for a man to be the judge of his own cause (e.g., vote himself a pay raise with public money), but it is far more serious when groups of people can be both judges and parties to a collective cause because that will destroy the liberty of the citizens. Such a group, which he called a “faction” could be any organized group seeking its own advantage, and a federal agency is not immune to having its own factional interest. In fact, if you “follow the money” in any bureaucratic agency you will discover a tendency to favor the pay for its own staff and budget over the people its programs were designed to serve. Most people are aware of this bureaucratic tendency when they are asked to routinely asked vote for public school levies. Such agencies are relatively recent in modern history and they are poorly understood, except for a few experts like Max Weber that pioneered the scientific study of bureaucracy. Most laws passed by Congress today do not provide proper incentives and checks and balances for agencies to accomplish the missions they are created for.

Why doesn’t the Supreme Court consider arming federal agencies unconstitutional, when it clearly is?  There is a problem in the Supreme Court’s own construction that provides it self-interested reasons not to uphold this area of the Constitution. The Court itself is an organ of the Federal government and, as such, has much to gain from the advance of Federal power. Hence it has a built-in motivation not to exercise its duty to protect the Constitution or the interests of the States that make up the union if it would affect its own power. While having a Supreme Court is important, the founders failed to provide adequate rules for its construction and successful operation in this regard. When justices are appointed by the President they are often picked to serve his interests, not that of the citizens or states. To fix this problem, it is perhaps necessary for judges to be chosen by another method that would eliminate this conflict of interest, perhaps by lottery from among nominations by state legislatures. The arming of federal agencies is another reason why we need an upgrade to our political system, one I have called “Life, Liberty, and the Pursuit of Happiness, Version 4.0.”