↓
Home→Articles→Government→Giving Up on the Constitution? 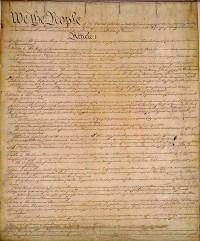 The U.S. Constitution was to Restrain Government and Consolidation of Power

In a December 30 editorial in the New York Times, Georgetown professor of constitutional law talks Louis Michael Seidman wrote about ideas in his book On Constitutional Disobedience, arguing that the failure of the U.S. government lies in archaic and evil provisions of the U.S. Constitution. I would argue that we should not treat the constitution as an inerrant eternal document that judges prooftext like theologians do sacred scripture, but much of our current dysfunction stems from ignoring the vision and principles behind it and the legal changes made in the two hundred years following its creation. In addition, I agree with him that the Founders could not anticipate many of the changes in technology and society. However, he is offering little hope that he would apply founding principles to these developments like large corporations and a global economy.

In his first example, Seidman argues that we should not care whether the tax plan originate in the Senate or the House. In some respects he is right because the 17th Amendment gutted the original Constitution of the very important reason to have two houses in the first place–the concept of checks and balances on power, with the States appointing Senators, and the populace electing their representatives. In that case it was important that the people paying the taxes–not elites–determine how their own money would get spent. Otherwise there is theft and dysfunction, which we know have in spades. With the passage of the 17th Amendment, the people elected representatives in both houses, so the concept of a Senator became gutted of its meaning except the “representatives” in the Senate serve longer terms. However, they represented the same group, so an important check and balance that helped to keep the system functional was made dysfunctional. In the present case, with no checks and balances, it would be more efficient to have a unicameral legislature.

Political theorists from Plato to James Madison teach sound lessons about the inevitable failure of any democracy in which the majority of the population, which is likely to be more impoverished than the best educated, can vote to redistribute property to itself. It is actually a conflict of interest to use ones vote to redirect other people’s money to themselves. The 17th Amendment helped hasten America’s decline down that path by removing the check that preventing the population from destroying itself. By using the popular political rhetoric that propertied white men of two hundred years ago could not have known conditions of modern society, Seidman creates an excuse not to have a social compact that provides checks and balances on the aspects of human nature that enable us to bring harm to one another. When one reads the anti–federalist and federalist debates, it becomes clear that the founders knew more about human nature than most contemporary law professors, even though they could not anticipate changes in society that contemporary law professors can witness.

But Seidman is right that slavery, which was against the founding principles, was like wrong to be brought in as a compromise, and that the 13th Amendment was unconstitutionality passed. He neglects to say the 16th amendment creating the Federal Income tax was also unconstitutionally passed, but he is wrong to blame James Madison’s generation for these particular usurpations of power that they might likely decry. Instead, one has to blame human nature, and if anything one could argue that if the Constitution should be challenged, it should be on the grounds because it did not provide sufficient checks on universal tendency of human nature to consolidate wealth and power in order to control others.

The more important Founding Document is the Declaration of Independence. It contains the vision and mission statement of the United States, and it spurred both the creation of the Articles of Confederation and the later Constitution we now have, when that original document failed to provide enough central power for perceived national security and raising taxes. Many anti-federalists correctly prophesied that much of our dysfunctional would come to pass because of the excessive power given to the Federal Government, which was too remote and distant to represent or care for its citizens. They worried that uncontrolled bureaucracies would generate plans that had little to do with the founding mission, and that the government would spend every cent it could wrest from its citizens. Seidman is right, when he quotes Franklin D. Roosevelt’s statement that the Constitution was not a statement of aspirations, but it was an attempt, albeit imperfect, to provide a machinery that would enable people to pursue life, liberty, and happiness without bringing harm to one another (and the slavery sections certainly violated those aspirations).

Seidman is right that some of the legal changes in our society have helped us to grow and prosper, but it would be a mistake to assert our freedom from the Constitution without applying many of the founding principles to any revision: principles of equal protection, subsidiarity, Checks and balances, elimination of thousands of conflicts of interest in government, and the ability for a state to voluntarily secede. For without these principles–not the current document–the options are likely to be between chaos and totalitarianism, particularity when we have a shrinking self-sufficient middle class not receiving some economic assistance from government.

Seidman gives up on these principles and clearly seems to support self-interest and power politics in international affairs, particularly with respect to military action in Iran. In this respect he is arguing that many tried and true principles of international law and just war can be ignored, like George Bush ignored them in Iraq, with rhetoric like “pre-emptive war” that clearly is an expression of bully behavior based on having the disproportionate power to be a bully. Bully behavior, if not anything else, is an expression of the Hobbesian state of nature. It is what he calls “contemporary policy grounds” that is a euphemism for Hobbesian behavior–and it should be checked, not just by Constitutional law, but by moral law.

So in conclusion, I agree that we could consider changes to the constitution, and can agree with many of the historical facts that he raises about the Constitution, but the problem is whether changes he hints at are an attempt to free himself from principles of sound governance in order to legitimate self-interest above the purpose of others, or whether changes to the constitution should be amended to further restrict our ability to tax, oppress, and attack other people. By viewing his examples, I suggest he would like to shed the Constitution, not to make society more principled, but to allow elites with money and political influence to make their own decisions as they wish and not be constrained by sound rule of law.