All human life can be divided into Quadrants. The classification in Figure 1 was developed by Ken Wilber and outlined in his book A Theory of Everything and elsewhere. These quadrants are defined by individual, collective, internal, and external as indicated below. These quadrants refer to an individual mind and body, and a social “mind” and “body,” where the social mind is reflected in cultural consciousness and the body in social institutions. 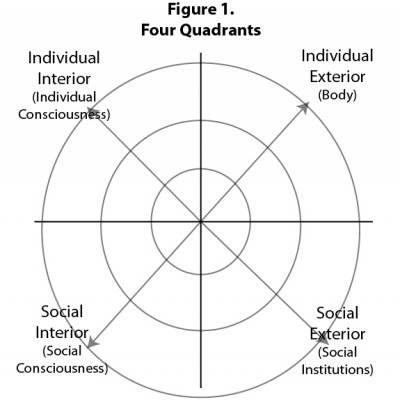 Wilber’s 4 Quadrants, with circles representing levels and stages that include all quadrants in a “holon.”

Wilber has further developed these quadrants into “levels,” which might sometimes also be seen as “stages.” For example, a nation-state is a social level beyond a tribe, yet the stage of tribal development is a foundation for the creation of a nation-state. Each level is considered a “holon,” when the four quadrants are all included.

Ken Wilber refers to level of social consciousness as a “meme.” “Genes” and “memes” are often referred to as the coding that makes up individuals and collectives. A “gene” normally refers to the external biological coding of the body, whereas for Wilber a “meme” refers more to the level of internal development—consciousness. For some other theorists a “meme” is more related to the external structural coding of society.

In addition to quadrants, Anderson’s view includes spheres, which compose a z-axis on Wilber’s four quadrants.

Many theorists also include the concept of gender, a much debated topic. Gender is biologically determined by chromosomes (upper right quadrant), however there are expressions of gender associated with the other three quadrants that are not as rigidly fixed.