Society consists of three spheres, cultural, political, and economic. Each sphere is characterized by a major purpose and principle: 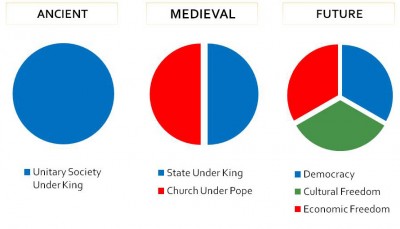 The evolution of social spheres

The evolution of the relationship between church and state began in the Roman Empire with division of heads, but forced doctrine on the cultural sphere, which should be based on love, creating social stagnation. This evolved with the freedom of religion first in the Netherlands, and next in the United States, evolving into excessive separation of social consciousness from social instituions. The relationship between these two spheres is still not integral.

The relationship to the economic sphere has never been appropriately defined. Modern corporate capitalism has attempted to control governments, while communism and Keynesianism attempt to make the economic sphere subservient to government. Neither of these approaches reflects an organic integral approach. 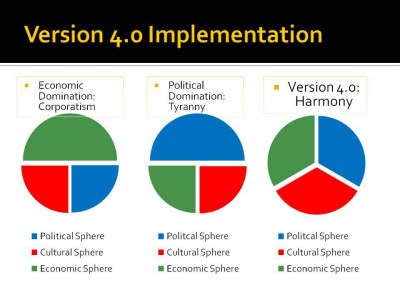 Oppression of society by a social sphere