The bankruptcy of San Bernardino analyzed by a Reuter’s article yesterday is a study in the growing dysfunctionality of governments in which public unions and politicians are creating total chaos by spending obligations that defy the laws of math and morality. Fifty years ago San Bernardino was a prosperous middle class city. Today over 1/3 of the population lives below the poverty line while a police lieutenant can retire with a one-time payout of $230,000 and a guaranteed pension of $128,000 per year after that. Nearly 75% of the city’s entire budget goes to the police and fire departments and its largest creditor, Calpers (the California State public employee fund), is owed $143 million. But Calpers says San Bernardino would have to pay $320 to leave its system, because it has banked on a mystical 8 percent projected return on its investment in San Bernardino. The second largest city debt is a list of private creditors that hold $46 million in pension bonds. They are threatening to sue.

Calpers and many other large public funds rely on Wall Street returns. In fact, many of them have entrusted hundreds of billions of dollars to Wall Street fund managers who are paid the huge Wall Street fees regardless of fund performance, and take up to a 20% commission if funds perform. As government pension funding projects further shortfalls (actuaries estimate public pension funds are now only funded with 41% of their obligations) they invest in higher risk stock and hedge funds–treating funds held in trust for government employees with much less respect than the employee would treat his own money. Some public employee pension funds appear no safer than Bernie Madoff’s schemes–they just play by looser rules (GASB vs. FASB) and expect taxpayer bailouts or future generations will pay for money they take from public treasuries.

Perhaps the largest mystical belief is that a government today can guarantee defined payouts thirty years from now. Such beliefs are rooted in the idea that government budgets will continually expand and that pension funds will receive at least 8% growth every year, and that Wall Street can continually generate 8% returns on money it invests, no matter how overcapitalized the market is. Some private corporations held similar mystical beliefs in the 1940s and 1950s, but learned that corporations do not all continue to expand when Studebaker collapsed leaving thousands of employees, some who had worked over 40 years, without their pensions.

In 1959, Studebaker, a manufacturer fallen on hard times, agreed to increase benefits – its third such increase in six years. In return, the U.A.W. let Studebaker stretch out its pension funding schedule. This bargain preserved the union’s wages, as well as management’s hopes for a profit, though it required each to pretend that Studebaker could afford a pension plan that was clearly beyond its means. Four years later, the company collapsed. (New York Times)

The next tactic the United Auto Workers union (U.A.W.) tried  was to get the government to guarantee pension funds against such a collapse, the way Fannie Mae and Freddie Mac were designed to guarantee against home mortgage failures. Thus in 1974, Congress passed the Employee Retirement Income Security Act, or Erisa, that established the Pension Benefit Guaranty Corporation (PBGC) to insure private pensions. This worked for a while, but corporate pension fund accounting became more creative, banking on future returns on investments (ROI) that were not maintained. In about the year 2000 assets in the stock market took hits and a wave of private pension fund sponsors dumped their obligations to the PBGC.

When Kaiser Aluminum, Bethlehem Steel, Kemper Insurance, and United Airlines dumped their obligations they broke no laws. But it turned out that P.B.G.C. could not cover the cost of all the corporate pension fund failures because their insurance rate calculations had been based on the same mystical faith in government guarantees that would surface in home mortgage guarantees a few years later when the housing bubble burst. While most corporations began moving away from defined benefit plans to defined contribution plans after the Studebaker collapse, General Motors a stalwart of the U.A.W. retained its defined benefit plan until it was brought into bankruptcy, and in a controversial measure under the Obama administration, assets were shifted from stockholders to the union in a reorganization that also ended the defined benefit plan.

Government pension funds, like most government organization structures, tended to lag decades behind corporate restructuring because they could use the force of taxation power to offset mystical pension mathematics–for a while. But ultimately the strongest government force will not extract blood from a turnip. Governments, in the end, are subject to the same economic laws as everyone else in the world, and the government ponzi schemes many people have warned against for years are finally coming home to roost.

A key to any stable society is life within the bounds of known principles. The U.S. fascination with pension funds, as noted in previous articles, is spurred by a tax structure that encourages individuals, corporations, labor unions, and governments to invest retirement funds in stocks and bonds.

And just how important were public pension funds to the private equity billionaires over the past three decades? Just look at the numbers: the amount of pension fund money that was invested by private equity firms rose from $200 million in 1980 to $200 billion in 2007 — a thousand-fold increase. As the New York Times succinctly concludes: “Private equity owes its explosive growth largely to America’s pension funds” (Anderson, J. (2010, April 3). Pension Funds Still Waiting for Big Payoff From Private Equity. New York Times, p. B1).

Its not just corporations and governments that have promised and failed to deliver luxurious retirements, average citizens have been encouraged to establish their own 401k and 403b plans, receiving tax deferments on their retirement plans. These plans, along with lower capital gains taxes than other taxes (discussed in previous article on this blog) has encouraged middle class Americans to rely on Wall Street as well, causing the 1,000-fold increase in pension fund money invested by private equity firms in the last 27 years. 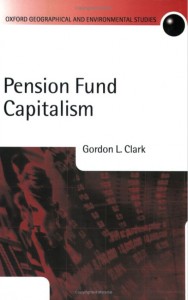 Are pension funds creating a new form of mystical capitalism? Gordon Clark wrote the first book on this topic in 1998.

These large amounts of capital have fueled outsourcing of U.S. production and the replacement of small retail stores with chainstores offering lower wages as they have sought to generate returns on this concentrated capital. But in the end, this entire system relies on the endless increase of consumption, a belief no less mystical than the idea U.S. corporations would continue to expand, or the idea that governments like San Bernardino and thousands of other local governments in America can fund defined benefit pension plans.

Pensions can be a good thing, I’m not opposed to them, no one will be able to work and earn money in their 70s and 80s like they can in the 20s and 30s. But, pensions must be constructed according to the laws of economics and not based on political rhetoric and mystical beliefs that defy them.