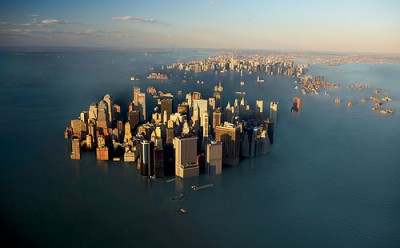 An image based on fear not science

June 20-22, 2012 will be the dates for a big conference on the environment called Rio+20. It will be held in Rio de Janiero. Before then, and during the event, we will hear many arguments about climate change and why we need a green economy. The climate is always changing, and I believe in the value of science, living sustainably, and thinking “green.” However, I have yet to be convinced that what the United Nations has told us is based on good science or that UN agencies really have the ability to “care” for the environment and, if they did have the ability, they would be the right authority to enact taxes because of conflicts of interest. And, further I have come to be suspicious of the motives of any government or corporate official that uses the logic of fear to garner support that will increase his or her wealth or power.

The Cause and Solution to Sea-Level Rise

As a case in point, lets look at the issue of sea level rise. In the climate change debate there is much discussion of the rise of oceans as a result of glacial melt. Glacial melt, the argument goes, is a result of global warming; and global temperature rise is caused by the human activity that causes greenhouse gases; and greenhouse gases are created by carbon emissions, such as from burning  fossil fuels.The solution, it is argued, is to have a global authority tax the use of carbon fuels and take the money to create sustainable environment programs.

This logic, while containing some truth in most steps of the argument, is not science. The environment is a highly complex system. Such systems do not follow linear principles but require other forms of analysis, because complex systems are able to adapt to changes until they reach a tipping point. Further, complex systems involve many numerous and interrelated parts so that a single action, like taxing the use of green house gases will affect other components of the system, for example the number of people living on the earth, in addition to the component the tax policy is designed to fix. In this case depopulation might be an unintended consequence, and conspiracy theorists might argue that it is an intended consequence. The main point is that even if all steps in the logic of the greenhouse gas argument are true, the use of linear logic in a complex system is unscientific.

The Use of Fear

Franklin Roosevelt made a good point when he said “the only thing we have to fear is fear itself.” Fear is a well-used tactic by people in positions of high office to garner support from those they want to lead. The Romans crucified victims and left them hanging to scare others into obedience. The Church has often threatened people with going to “hell” if they disbelieved. The Soviets told their people that the United States would take over Russia if the communists lost power, and therefore the people needed to sacrifice for the purpose of the whole. In the United States we heard the argument that if we failed to bailout the banks the economy would collapse, but what we discovered is the banks involved in fraud were bailed out while honest banks were allowed to fail. It is well-known that many political leaders will fabricate a crisis to get power. 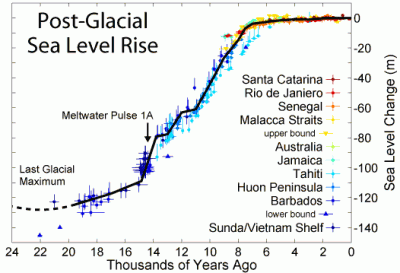 Sea level rise tapered off 8,000 years ago, but was much more dramatic in the past, without human activity

People who seek economic funding for grants often use a similar tactic to get grant money from philanthropists or government agencies, and often this is less about solving a real problem than having a job and food on the table. Savvy philanthropists and agencies understand these tactics quite well because it is their job to understand the difference between genuine research and a con game. However, average citizens who are not savvy about science, complex systems, or tactics used to manipulate government policies for self-gain are more likely to fall for fear tactics designed to convince them to accept the authority of the United Nations Environment Programme and a tax they seek to support international environment programs that will employ scientists, bureaucrats, and enforce policies that dictate how people live–all in the name of solving the “very serious problem” of sea level rise.

After a glacial period ended about 22,000 years ago, global sea levels began rising quite rapidly and then began to taper off to a very small rate of rise about 8,000 years ago. Since then the rise has averaged about 8 inches per century (see Chart 1). 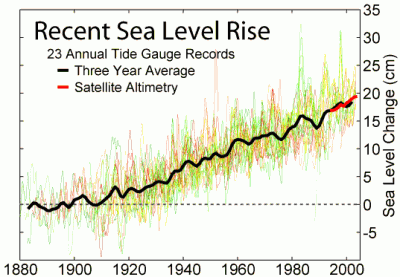 Despite the massive population explosion and industrialization of the last 100 years, this rate in ocean rise has remained quite stable as indicated on Chart 2, which shows ocean rise in centimeters rather than meters. This chart creates the illusion of an alarming rise, yet when this rate of increase is plotted in meters on Chart 1, we see that the sea level rise has continued within a predictable margin of error whether humans were involved or not. Now it is quite possible that human activity has an impact on climate change, but this impact is not significantly proven by those who would sport Chart 2 to show the sea level rise in the last 100 years, when that same rate of increase has been going on for thousands of years. The effects of human activity may only minimally impact greater global trends.

Rather than displaying such charts, and illustrations that can be manipulated to create an abstract impression of reality, it would be more convincing to present photographs comparing real shorelines 100 years ago and today. Further, it has been argued by many that today’s greenhouse gases are actually much lower than thousands of years ago, and this has contributed to the desertification of many parts of the world that were once lush and green. Therefore it is not clear that, even in the event of further ocean rise, all conditions for the earth’s ecosystem would be worse off.

Today at the United Nations there is a block of nations—some with as few as 30,000 citizens—representing small low elevation islands in the Pacific. A sea level rise of  two meters, which at current rates would take nearly a thousand years, would make a large impact on them. However, if some land were lost in the Pacific as a result of flooding, there might be an increase in habitable land where deserts would begin to bloom as a result of a greenhouse effect. If changes are as slow as they currently are, natural human migrations would occur without the imposition of legislation and taxes that will redistribute wealth from producers of goods and services to people who run government agencies. Little evidence has been shown to prove that the much larger sea level rises (120 meters) in the past caused global destruction or human annihilation.

Conflicts of Interest and Government Agencies

One of the most serious challenges to complex social organization has been the rise of bureaucracy and the failure to eliminate the conflicts of interest that result. No person should be allowed to profit personally from the creation of a law, policy, or tax they are empowered to create.

I sit on the board of trustees of a university and every year I am required to sign a conflict of interest form. For example, if I owned a vending machine company, it would be a conflict of interest for me, as a trustee, to set up a contract for the university to use my own vending services. Thus, the passing of a law or policy that creates the funding for the services, must be separated from administration of that law.

Many government agencies lack this type of protection against conflicts of interest. For example, the US Congress both has the power to tax and the power to set its own salaries, and determine the buildings and staff it will have. However, if state governments paid the salaries of the representatives they send to Washington, and paid for the staff and rent of those who work for representatives, then the task of allocating money would be separated from the self-interest of the representative.

Many agencies have been created naively by people who do not understand this dynamic, or they have been created full well believing the public is so ignorant that they will never see how they are being disabused by an agency. This is a bit like a policeman that has the power to stop your car for an arbitrary traffic violation he makes on the spot so he can collect a fine for himself before he lets you go. If United Nations administrators, employed by the UN, have the power to create laws and policies that produce fines and the UN Budget, and the same organization has the power to distribute this income among its employees, this is a serious conflict of interest.

In a recent discussion over the misuse of USAID funds for political purposes, a person who used to work for USAID commented:

Our development aid would be more effective if we simply flew over less developed countries and shoveled money out of a helicopter. I worked for USAID in the ’80s. We spent more money on the employees than on doing anything useful for the people we were allegedly there to help.

Who Rules the Rulers?

I will not belabor the problems of the ancient question posed by Juvenal, “Who guards the guardians?” This is why we have constitutions with checks and balances on power.I have discussed many conflict-ridden agencies such as the SEC, the Food and Drug Administration, and the Federal Aviation Administration in other articles on this blog. The main point is that most government agencies that currently exist in this world fail to adequately protect against conflicts of interest.

If the United Nations establishes a carbon tax and that money goes to any employee of any agency of the United Nations, it is an unsustainable and destabilizing conflict of interest, likely to have more serious consequences for the planet than any global warming that science has yet documented.

To scientifically explain global climate change, the tools of analysis of complex systems, and not linear systems, must be employed. The use of such linear unscientific logic by persons and agencies that would profit either financially or politically from laws based on this logic are suspect at least and more likely fraud obfuscated by rhetoric and propelled by fear.

I am not opposed to the existence of the United Nations or UNEP, my main concern is that these organizations, like many modern government agencies,  are not sufficiently structured to effectively promote wide dialogue or recommend non-conflicted taxes for the purposes the agencies are purported to serve. The arguments being promoted by these agencies look more like the tactics of unchecked power than the constructive solutions scientific problem solving tends to generate.