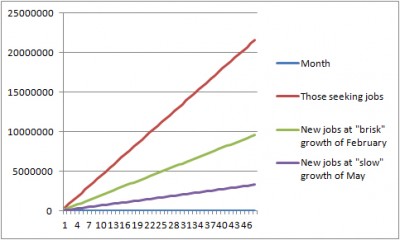 According to the US Labor Department the United States added about 69,000 new jobs to the economy in May 2012. Yet according to demographics, about 160,000 new potential workers need jobs each month. Add those numbers to the 12.7 million already on unemployment and, at the labor department’s “brisk” growth rate of 200,000 new jobs per month, it would take over 20 years to get the unemployment rate down to 3%.

In February 2012, 200,000 new jobs growth was considered “brisk” job growth. Yet, 358,000 new jobs for a sustained 4 year period would be required to bring the unemployment rate down to 3% and absorb all new potential workers.

Each month approximately 335,000 young Americans reach the age of 18 and 240,000 older workers reach age 65, pressing the labor market to add 95,000 new jobs for natural population growth. In addition, an average of 83,000 new immigrants arrive in the US each month, and most of them seek work.