On April 25, 2012, I proposed a new election system to ensure that political candidates were qualified and that special interests did not control the outcome of elections–two of the major problems that result from the process in which votes are cast many places today.  While that system would be superior, it would require major changes that many governments are not ready to make. However, there is one simple measure that would take very little effort to change, that would improve the quality of our governments significantly: remove party affiliation from ballots. 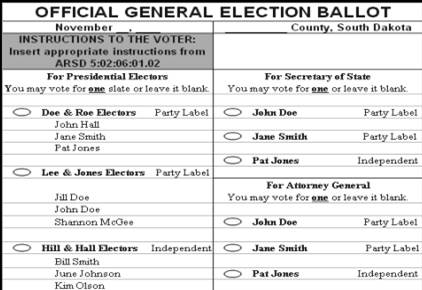 Eliminate the Problems of Faction and Uninformed Votes

Ballots that simply list the names of people without political party would prevent people from learning the political party of the candidate at the polling booth. They would need to know something about the candidate before entering the polling booth or their vote would effectively be random. This means that uninformed votes would cancel each other out and that informed votes would determine the election outcome.

Many ballots include party affiliations under the rationale that if a voter doesn’t really know the candidates, they can vote for whoever a political party nominates. This is the party’s argument that the voter can still cast a meaningful vote (for the party’s interests) without being an informed citizen. While this may aid the individual cause of uninformed voters, it does not serve the cause of good governance, but exacerbates the problem of faction. The U.S. founders sought to prevent the highjacking of government by factions, and political parties are the very definition of a political faction.

Take, for example, an uninformed voter receiving welfare payments from a government. If a political party, typically the Democrats in the United States, is known for lobbying for higher welfare benefits, this voter, knowing nothing about any candidate or issue besides he is likely to receive a larger check if he votes Democrat, will check off a slate of Democrat candidates.

Further, a voter going to the polls with advance knowledge that party affiliation will be listed on the ballot will be disincentivized from studying what individual candidates stand for ahead of time because he knows he can vote a party slate. This turns a “citizen,” an informed member of a society, into a “voter,” an individual who will vote selfishly. Since a democratic system of governance requires “citizens” to remain a democracy, the labeling of ballots with party affiliation of candidates undermines the concept of democracy.

The idea of democracy rests on the premise that individual citizens are capable of self-rule and self-determination. If an individual cannot manage himself, he is hardly capable of managing affairs in the interest of others. A representative democracy presumes an individual citizen is employed in business or other affairs and cannot study every issue up for legislation himself, so a representative is elected to govern on his behalf. An informed citizen will vote for a competent representative, a person the citizen trusts to govern on his behalf.

A faction, like a political party, does not put candidates because they are capable of governing. Factions put forth candidates that represent the interests of the faction. A faction inevitably prefers to put forth a puppet who will vote for the interests of the largest financial contributors to that faction, not for the interests of society as a whole, or even the interest of the voters who voted for the faction. The uninformed voter thus becomes an unwitting pawn of the party he believes to be helping him. However, a faction will be incentivized to promise one thing to a voter, but then deliver on promises made to the backers of the faction after the election.

Factions will inevitably compete over resources and ignore public interests

Factions will inevitably compete over the limited resources of government and become belligerent rather than civil. They will also ignore any issue that is not in the interest of their factional platform. This problem is one of the reasons for political dysfunction in the United States. We witness “across the aisle legislation” where Republican and Democrat interests each get some reward, usually financial, at the expense of the taxpayer. However, real taxpayer interests–like immigration reform–do not get addressed because the factions are unable to compromise on them and deliver a result that serves the citizens on the whole.

The Rising Trend Against “the Establishment” in the 2016 presidential election

American citizens are beginning to realize that the special interests at the base of the Republican and Democrat political parties are using the parties to serve themselves and not the middle class or the society as a whole. Less than 40 percent of Americans want their dysfunctional political system to continue as it is. Hence we saw the rise of Bernie Sanders, Donald Trump, and other candidates trying to be the voice of citizens rather than puppets of a “rigged system.” Part of the rigging was in the way political parties gain control of the system by placing their names on the ballot. These names end up more important than the candidates to an uninformed voter and allow the parties to hijack the political system.

Much of this dysfunction will end if special interests do not control the outcome of the elections, but the outcome is returned to informed citizens. Removing party affiliation from election ballots will go a long way towards ending this dysfunction because it will remove the control that factional interests now have over uninformed voters at the ballot box, by ensuring the votes of uninformed voters cancel each other out, and that the results of an election are based on an informed citizenry.