Many people take political parties for granted and assume they are an important part of the democratic process. However, political parties inherently subvert and hijack government and are anti-democratic at their core. Today we hear lots of people from both the left and right saying “Washington is broken,” but we hear them blaming the president, congress, or the courts. This blame is misplaced, not getting to the core of the problem, which is the fact that today these people largely represent political parties, not citizens. Gridlock is caused by partisan bickering that the Founders sought to avoid. But, over the last 200 years political parties have gradually hijacked the federal government. 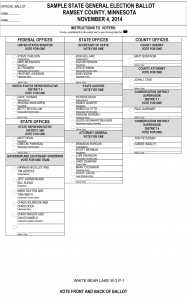 This sample ballot shows party affiliation for federal and state candidates, but no party for county positions.

Political Parties are Divisive Factions
Political parties are factions, groups of people that combine themselves for some common purpose. By combining their power, they can have more influence over lawmakers than individual citizens. However, this influence focuses legislators on the wants of these interest groups rather than the general citizen or the needs of the nation as a whole. Founding Father James Madison saw factions as the primary means by the American government could be subverted and destroyed. In the opening lines of Federalist 10 he wrote:

Among the numerous advantages promised by a well-constructed Union, none deserves to be more accurately developed than its tendency to break and control the violence of faction. The friend of popular governments never finds himself so much alarmed for their character and fate, as when he contemplates their propensity to this dangerous vice.

Madison described a faction as follows:

By a faction, I understand a number of citizens, whether amounting to a majority or a minority of the whole, who are united and actuated by some common impulse of passion, or of interest, adversed to the rights of other citizens, or to the permanent and aggregate interests of the community.

This definition certainly applies to the nature of a political party. Unfortunately, Madison could not see any method of preventing the rise of factions, because people by nature form groups to pursue their own ends, and these ends are often in conflict with the good of the whole. Thus, good governance requires controlling the effects of factions. However, Madison noted that a pure democracy has no recourse and devolves into mob rule, where a faction representing a majority will trample on the rights of other citizens or the weaker parties. The solution he proposed was a republican form of democracy in which legislators, consisting of qualified people representing different localities, would constitute a check on factions. And,further, the Senate, consisting of people appointed by state legislatures, would provide a check on the House, by representing states’ interests rather than the populace.

From the onset, the impulse of faction took hold in the new nation. However, in the first decades of the union, political parties (Whigs and Democrats) represented almost exclusively differences of political philosophy on such issues as the size and role of the federal government vs. the power and role of the states. However, by the time of the Civil War, it became easier for factions to manipulate the government, particularly industrialists promoting railroads and arms, forming a precursor to what President Eisenhower called “the military industrial complex.”

However, a few “crony capitalists” in a federal government that had a rather small budget, primarily gained from excise taxes, did not have a significant impact on the life or freedom of the average citizen. The only federal agency affecting daily life was the Post Office, and it paid its own way through a fee for service. What really began the major dysfunction and disintegration of the system was when it became possible for the federal government to tax citizens directly and redistribute the funds to interest groups. This changed the fundamental goal of political parties from distribution of political power, to redistribution of national wealth through theft made legal by laws favoring special interests (factions).

With Economic Redistribution Parties Became Legalized Thieves
Ironically, after the passage of income tax laws, the Republican Party changed from being for stronger federal government to support of states rights and self-reliance, and the Democratic Party changed from rural self-reliance to support of redistribution of wealth from industrial profits to the poor. During the twentieth century, red cities became blue, and the blue rural areas became red. But perhaps more important, political parties became more entrenched and powerful.

The idea that when a citizen votes in an election and is forced to choose between candidates put forth by two political parties would make Madison roll over in his grave. Many towns and local communities still shy away from putting party affiliations on ballots for local elections, as they cause great division within a face-to-face community. In the State of Minnesota, party affiliations were added to state positions on ballots in the 1970s, and as a result partisan politics has become increasingly contentious at the state level, as it has been at the Federal level.

Partyism is a Form of Tribalism
The contentious battle between political parties in Washington today is not all that different from the rivalry between the Hutus and Tutsis for power in Rwanda, or the Sunnis and Shia for power in Iraq. We have created language to argue that these contests are different; it was tribal warfare in Rwanda and religious warfare in Iraq. In essence, however, these contests are wars between opposing groups, with different interests, who would like to use to power of government to gain economic benefits for their group at the expense of the others. Partyism is basically tribalism with a different name.

What Can Be Done?
In the spirit of restoring sustainable and functional governance it would be good to pursue some strategies that would reduce the harmful effects of political parties on American society:

1. Eliminate Party Affiliation from Ballots
Removing party affiliation from ballots would be one step in changing the role of legislator from “party patsy” to “citizen representative,” as the original purpose of legislators was to be. This would cause citizens to investigate the qualifications and ideals of the legislator, and hold representatives more accountable to the people than to the special interests funding a faction.

2. Eliminate Factional Funding of Political Candidates
Candidates will naturally follow the money that funds them. Another step would be to allow only citizens, not corporations, PACS, or political parties to fund political campaigns. That will encourage political campaigns to serve voter interests rather than self-serving elites or factions purporting to act on citizen behalf. A further democratization could take place by limiting the amount any citizen could contribute to a candidate to, say, $100. This would prevent the super-rich from controlling elections.

3. A Lottery Among Top Candidates
Having a lottery among the top few candidates would eliminate any possibility that money could control the outcome of an election and be a secure way of ending the grip of party control of government. The top candidates in an election would be those that had some measure of voter support, yet a final choice through lottery would yield an outcome no party could control.

4. Abolish the 17th Amendment
The 17th Amendment took away the power of state legislatures to appoint U.S. Senators and instead placed Senators on citizen ballots. This move fundamentally eliminated the reason for the existence of the Senate, because both houses would represent the same interest group. In principle, it is better if the lower house represents the interest of the populace and and upper house represents the states who originally formed a union for common defense. Then a bill could only pass in Federal Legislation if it both served the interests of the citizens and the states. The 17th Amendment was an improper end-run around state interests.

Conclusion
Today we see much collateral damage to the government as a result of the party control over the system. For example, the president appoints Supreme Court nominees. However, since the president has basically become a partisan patsy he inevitably appoints partisan judges, and this only harms the Court, which is supposed to be impartial and judge based on constitutionality. The same can be said of any appointment of the head of a federal or state agency today. The current party system ensures appointees will be awarded position more on the basis than party loyalty than on personal skill in the field they are supposed to administrate. Cronyism has been with us at least since appointments in the first US Post office, but personal cronyism is less dangerous than political cronyism because the president has to argue to the Senate that the appointee is qualified. However, if the president and senate are both controlled by a party, the outcome is often undesirable. Recently we saw this with the Bush Administration’s appointments of people supposed to rebuild Iraq, as well as the recent Ron Klain’s recent appointment as “ebola czar.”

While political appointees are often likely to be political hacks or cronies, they are more dangerously so when party factions control the officials making appointments. Then the entire machinery of government, not just the elected officials, becomes a servant of party interests rather the the purposes for which the agencies were created.

There are many other things that can be done to curb the destructive influence of political factions on our society. They have become well-entrenched viruses in the entire political system. However, if we can eliminate their basic power through implementation of some of the steps I have noted above, then the problems of collateral damage may, over time, sort themselves out.