The bitter partisan politics reflected in the invocation of the “nuclear option” in the ratification of the appointment of Neil Gorsuch to the Supreme Court by Donald Trump reflects the unraveling of machinery of U.S. governance with political parties embedded in the present system. The same fundamental problem existed when the Republicans refused to affirm Merrick Garland. The underlying problem is that these two appointments became partisan appointments as soon as they became a topic for debate in the Senate, whether or not they were proposed by Presidents Obama and Trump for partisan reasons. This is a structural problem. 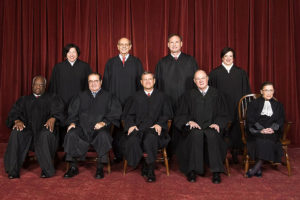 The U.S. Supreme Court is currently chosen by a partisan political process

Over the last few decades the Supreme Court, which the founders did not intend to become a partisan body, has also become increasingly politicized with many decisions being brought and decided roughly along party lines. The consequences of the two political parties effectively hijacking the U.S. political system is becoming increasingly apparent, and checks and balances need to be either instituted or reinstituted to prevent this from happening.

The U.S. government was designed as a union of states, and a government of the people. It was not designed as a method for one group of people to control another. But, that is what it is becoming. The First Amendment to the U.S. Constitution both guarantees freedom of association and bans the “establishment” of religion. However, this clause, as it has been interpreted, failed to prevent the “establishment” of ideological groups based on secular claims, rather than claims about God. Thus political parties have been able to organize in ways that they have become more than free associations that talk about politics; they have become powerful groups that have become embedded in political processes. From the voter choosing between parties at the ballot box, presidents being leaders of parties, and “aisles” being created in both legislative houses to divide two parties, the Democratic and Republican Parties, and the interest groups that control them, have become de facto power blocks that run all three branches of government.

Political parties, to keep power, have been very good at manipulating American citizens with the lie that if people vote for them, it will be in their interest. This couldn’t be further from the truth. Having Democrat, Republican, or other party affiliation on a ballot is really no different than putting Christian, Muslim, Jew, or Atheist after a candidate’s name. All these labels represent group identities that serve as mediators between the voter and his salvation, and all of them ask you to put faith in them rather than your own ability to govern. In similar ways, political parties have hijacked many of the institutions of governance, from cabinet-level bureaucracies, legislative processes, and the post of President. In theory, these institutions should represent all the people, but in practice it takes very strong people to resist the corrupt influences of political parties–this can be seen in the near lock-step votes in both the House and the Senate along party lines, with very few legislators displaying independent thought.

The Uselessness of the Senate as a Check on Partisan Power

The U.S. Senate was designed as an “upper house” by representing the States that made up the Union. It’s voice was to represent the will of the states, while the Congress was to be elected by citizens to represent the will of the people. The founders sought a system of checks and balances in which the interests of the two bodies were as diverse as possible. A law could thus not be passed unless it was (1) in the interest of the people, and (2) in the interest of the states.

The 17th Amendment to the U.S. Constitution destroyed this system of governance by changing the appointment of Senators by state legislatures to being voted for the same citizens who vote for the Congress. This removed an essential check and balance on the creation of laws and made the Senate a redundant institution, representing the same interests as the House. By removing a direct say by the states in the Federal government, it changed the government from a “union of states” and a “government of the people,” to a more crass form of popular democracy that the ancient Greeks had long ago learned would inevitably fail. When people realize they can use the government to tax other people and appropriate the money for themselves through the force of law, they fight over the resources of government, rather than seek a government that works for all. As Plato noted, bankruptcy and mobs fighting in the streets is the inevitable consequence of such types of democracy.

The confirmation of Supreme Court Justices envisioned by our Founders by seasoned statesmen in the Senate, who were loyal to states rather than political factions would be a more appropriate role for the Senate than the type of Senate we have today. They could have been a better check against a partisan appointment by a president, basing a judges performance on genuine qualifications and state interests, rather than a rubber stamp or automatic denial based on party affiliation. The idea of a filibuster and the nuclear option did not even arise until the Senate was reconstituted following the 17th Amendment. In a non-partisan Senate, the procedure would be more like a review board for getting a Ph.D. at a university, rather than a contest between power brokers to control the government for special interests.

While repealing the 17th Amendment would bring back more functionality to the U.S. political system in a lot of ways, I am not convinced that a Senate representing State interests approving an appointment suggested by the President is the most effective way of separating the nomination from the influence of factions. Several years ago, I suggested a better way to depoliticize the Supreme Court:

I would like to propose and appointment system that would serve as a corrective to this problem, giving us a Court less controlled by money and more responsive to the concept of a federal system rather than to a consolidated national state:

When there is a Supreme Court vacancy, allow each state legislature to nominate a highly qualified constitutional scholar from their state. Then choose from the nominations by lottery.

There should be three primary goals in choosing a Supreme Court justice. First, they should be qualified in understanding the U.S. Constitution and the spirit of the founding. Second, every effort should be made to assure justices are not beholden to any special interest that would compromise their service to the entire society. Finally, they should be able to protect the interests of the states and the federal government by rising above the popular sentiments expressed by political parties and cultural fads.

While the vetting of nominations within the states would likely suffer some of the same problems we witness in the U.S. Senate where the people vetting the justices know much less about the law than those they are vetting, the product of the selection would represent the interest of the states, more than the interest of citizens. Then, if all the state-nominated candidates for justice are chosen by lottery, no political, religious, or financial group could control the outcome. This would serve as a guarantee of the spirit of First Amendment, in which no organized group of people should control the government at the expense of others.

Further, the appropriate level of the government for citizens to be involved in the selection of justices is the state level—for state supreme courts. This would help restore the important principle of subsidiarity to U.S. governance, making greater possibilities for efficiency, freedom, and competition between states to provide good social environments, and less opportunity for a totalitarian federal regime to emerge from a monopoly on power.