The Collapse in Russia in 1991 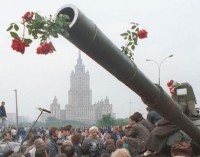 Having visited Russia over a dozen times before, during, and after the changes for 1989-1992, I witnessed the growing unrest in young people who graduated from college and could not get work. When the Russian revolution came, it was a political revolution aimed at ending the state control of the economy by an elite ruling class known as the nomenklatura[1] that was disenfranchising youth as those with positions selfishly hung onto them with tenacity. The elite had special shops, fashion shows, and hotels while state-run stores that served the common citizen had empty shelves and long lines. It was a society with a visibly growing double standard in which the elite were self-absorbed and inattentive to the needs of their children’s generation.

No new jobs were being created within the official economy and those who could not find work within the system created an alternative economy, a black market. In the outlying areas, I saw people living on farms with pigs, chickens, and outhouses in their back yards, living a nineteenth-century subsistence lifestyle almost as if communism had never happened. The 1991 economic collapse finally came when social security payments, military payments, and other entitlements led to bankruptcy. In less than a year the Ruble went from being worth over $4.00 to less than a quarter of a cent.

After the collapse, the black market essentially became a legal market. Pensioners were suddenly bankrupt as the rubles under their mattresses were essentially useless. I saw 80 year old retirees out on the streets selling their furniture, their war medals, and anything of value they had accumulated over their life. Military men, not receiving paychecks for months or years, sat across from the parliament in silent protest.

This was a new Russia and youth were in control. But it was also a time of anarchy. I had advocated converting the soldiers to policing the economy to avoid the rise of gangs and the mafia that predictably arose in conditions of lawlessness. The son of one of my professor-friends became a protection-racket enforcer in the absence of genuine police. Much like Italy after World War II, if Russians did not pay a protection fee, their cows were shot or their businesses looted or burned to the ground. Many of the nomenklatura managed to deed state industries and resources over to themselves.

The study of history and the knowledge of human motivation and incentive could both predict and prevent this outcome. However, Americans threw their hands in the air, rejoicing, saying “freedom and capitalism won.” We failed to help the Russians, because for the most part, Americans did not understand how many of the very same forces were at work at home.

This Situation in the United States

If you study the conditions in the United States today, you will find many of the same problems related to our out-of-control budget existed in Russia as they faced their crisis prior to the 1991 collapse. We have a different kind of elite ruling class, not a nomenklatura that developed from among Stalin’s trusted men and their descendants, but an elite that has achieved position and wealth through consolidation of political and economic power in other ways.

Our grandparents and great-grandparents managed a complete end run around the Constitution by the following:[2]

Today the United States is a modern bureaucratic state that in many ways suffers from the same bloated government as Russia. We have created what Max Weber called the “iron cage of bureaucracy,” trapped by bureaucratic agencies of our own making. Our bureaucracies grew from different ideological starting points, but ended up with people with the same human nature ogling them for job security at the expense of productive taxpayers. They sit aloof from the electoral process, largely isolated from citizen control, often with independent businesses or dedicated taxes to fund them. Who regulates these regulators? Mainly the people they are supposed to regulate.[3]

Today we have an elite class, an American nomenklatura, in which the largest corporations, financial institutions, and government have become inextricably intertwined. Tax breaks are provided for mergers and acquisitions that kill small companies and competition, and regulations are enacted that prevent competitive start-up industries from having a chance. Taxpayers bailout failed financial institutions and car manufacturers. 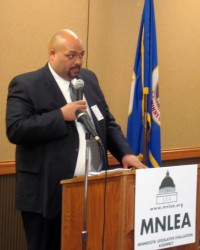 Northstar Tea Party Patriots Chairman Walter Hudson explains what it is like to be a U.S. worker in his thirties.

The Federal Budget just proposed by President Obama contains a 1.5 trillion dollar deficit. This deficit, which shows complete lack of self-control by the federal government, contains a gap of $12,000 for each taxpayer in America. In addition, in my state of Minnesota, Governor Mark Dayton’s budget contains as $1,500 deficit for each Minnesotan. Such budget proposals are irresponsible and unconscionable, causing citizens to become overwhelmingly oppressed by their own government. I certainly feel trapped in an iron cage of bureaucracy.

The Rise of the Tea Party

As in Egypt, Russia, and elsewhere those Americans that have little opportunity, or those oppressed from taxes and moving from middle-classes to lower-classes, those losing jobs and or houses, are saying they have had enough. The real estate bubble that was clearly a result of bad government collusion with bad bank lending practices spawned the rise of the Tea Party from among Americans previous not interested in politics, but now interested because their future clearly depends on change, and not the type of change the elites of either political party have been promoting.

Are today’s opportunities for American college graduates really that much different from a Russian college in 1985? Listen to what Walter Hudson, a security guard in his 30s and chair of the Tea Party Patriots in Minnesota has to say:

This is the plight of my generation, the new thirty-something, today’s young parent. Among my circle of friends, there isn’t a single person who could come here before you and express something resembling peace of mind. None of us expect the pay-as-you-go entitlements of today to be there for us tomorrow. Slowly but surely, we’ve begun to wake to the ponzi scheme that we’re on the bottom of. We work, not for ourselves, not for our children, but to pay off the debts of our elders. We do so wondering how it is that any parent could look into the eyes of their child and see a piggy bank. What kind of person would take from their own children?–Walter Hudson

Walter went on to outline the goals of his Tea Party chapter:

Having four children of my own, two of whom are in college and two that graduated (one is living back at home), I am quite aware that like for Walter Hudson, their opportunities are less than for my generation. They live in a more crowded and more indebted society with higher unemployment rates and fewer high-paying jobs for college graduates. These conditions have been created by increasingly irresponsible use of power and money.

These conditions escalated under the Bush administration and have accelerated even faster under the Obama administration. Under Bush, 4 private-sector workers had to pay for one public sector worker. Under Obama that number is approaching 3 private sector workers to support one public sector worker. Using the flawed philosophy that creating government jobs can help the overall economy, and that we need to protect our national interests with a huge military empire, the current government policies are creating conditions very similar to those that brought down the Soviet Union.

I remember having lunch in Moscow in 1989 with the general who was in charge of Russia’s occupation of Afghanistan, and listening to professors at the University of  Kalinin (now Tver) complaining about why they had to support unthankful Muslim states in the southern portion of the Soviet Union. These discussions were not unlike those you hear from Ron Paul or Jason Lewis in the United States today, and a large segment of the Tea Party is in agreement.

Powerful elites are frightened by the freedom and transparency of the internet. One of Egypt's big mistakes was to shut it down.

The Tea Party is not a cohesive political party, and Tea Party Partriots are not the only group that claim the Tea Party name. You have political isolationists, political adventurists, crackpots fixated on various minutiae, and people from all different religious, racial and ethnic backgrounds. You have neo-cons and big oil pushing Sarah Palin to take it over. Ron Paul would like to take it over and reestablish a gold monetary standard. Michelle Bachman would like to take it over so that her lobbyists could influence its direction. All these leaders and groups recognize one thing–the middle class has been hurt and pushed around by either big government, big business, or both. Thus, the Tea Party is a messenger, it is a bearer of the message of the need of economic and political reform, and lots of established people living off the corrupted system want to “kill the messenger.” It is the same reason some people want to kill Wikileaks or the internet.

Will the U.S. Revolution be Political or Economic? 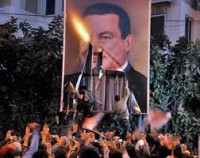 The revolutions in Tunisia, Egypt or the former Soviet Union, or even Iran were fueled by popular movements for more freedom and for less oppression by elites or neo-colonial masters that were ripping off large amounts of wealth. These reforms were largely to throw out leaders with dictatorial powers and establish democratic reforms, often inspired by the original Constitution of the United States.

The United States already threw off its English masters in the Revolutionary War, and its problems have been largely caused by gradually moving away from founding principles and failing to properly regulate financial institutions and the government relationship to money. In this sense U.S. reforms will need to largely be a restoration of  the democratic principles and checks and balances that have been lost or fallen in disarray, combined with economic and political reforms that end corporate/government relationships much the way church and state have been seperated.

These reforms will primarily call into question the 16th and 17th amendments, the prohibition on the right of states to secede, the secrecy of the Federal Reserve system, the concept of government borrowing, the concept of federal government sponsored education or research, the need for the CIA and many other agencies that seem to spend a lot of money in order to only have negative results, the idea of taxing labor rather than consumption that send jobs overseas and subsidizes foreign-made goods, and the list goes on.

I have talked about these reforms in my book Life, Liberty, and the Pursuit of Happiness, Version 4.0 and elsewhere on this blog. And, I will be continuing to do so in future articles. In the meantime, we ought to be thinking about a peaceful revolution in the U.S. that is less dramatic than foreign campaigns for democracy and enacted through legislation in Washington.

The American revolution will largely be related to economic policy. Two of the key reforms would be making combined legislation illegal, and creating an amendment as follows: “Congress shall make no laws regarding the establishment of business, nor prevent the free exercise thereof.” A third area will be moving beyond both classical and Keynesian economic theories to add viable theories of land, labor, and money to the principle of supply and demand.