2011 State of the Union Address

In his 2011 State of the Union address, President Barack Obama spoke about his desire to see the U.S. government create incentives to help revive the ailing economy. For the most part he presented a general vision of a prosperous America with full and meaningful employment. Republicans and Democrats can both agree with the vision, however they generally disagree on how to achieve it, and both of their strategies have had problems. The reason is the failure to develop a plan that properly accounts for economic incentives, instead of listening to the special interests that control the parties.

In his address, President Obama suggested that the government create a program analogous to the space race to promote economic innovation. Some of us remember that Teflon, Tang, and a host of other inventions came out of that space race. It is helpful to reflect on incentives surrounding these various developments.

Government actions did not provide research grants to produce Teflon, or Tang, they provided funds to put a man on the moon. Targeted government research for inventions doesn’t work, because the government agency or bureaucrat controlling funds is not the inventor. Government agencies control cash. However, cash for research begets more research, cash for a solution begets genuine research.

If you pay for a cure, you will get a cure. If you pay to put a man on the moon, you get a man on the moon–and Teflon, Tang and other byproducts came along with it as ways inventors found to solve problems associated with the task. Government would never have guessed what needed to be done, because solution come from the bottom up whereas commands come from the top down. 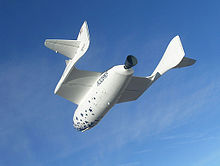 SpaceshipOne won the Ansari Xprize in 2004

One way a government can motivate research without causing economic dependency is to offer a big prize for a winner. Most recent on the minds of many Americans is the Ansari X-prize which announced a 10 million dollar prize for the first reusable plane to fly into space and return twice within two weeks. The $10 million prize was awarded to SpaceShipOne in October 2004. It was designed by Burt Rutan and financed by Microsoft co-founder Paul Allen. The team invested about $100 million.

The space shuttle, a much larger enterprise than SpaceShipOne, cost about $150 billion to develop and about $60 million for each flight after the shuttles were built.

If a prize is awarded after a solution is found, then government bureaucracies do not restrict the inventiveness that naturally follows research grant awards. No taxpayer money is spent for for bureaucratic overhead or for research that doesn’t pan out. Money is only spent for a result. For a large enough prize, venture capital will be raised privately to following the ideas of inventors, with hopes that investors will each get a share of the prize.

The second problem is taxation. Taxes on production cause less production. This is the inverse of getting more of what you pay for. You get less of what you tax. In the U.S. economy we tax labor in the form of income taxes. These taxes ultimately figure into the cost of production. This tax system was developed in a captive market before globalization of the economy. It worked because everyone was forced to play by the same (U.S.) rules.

We also try to tax corporations, but the result is higher CEO pay. Then we complain about the high CEO pay. We don’t seem to realize that a corporation would rather hold parties, run more advertising, pay their employees more, or do just about anything to avoid paying taxes. If you tax on the net worth of a corporation there will be less investment in infrastructure. If you tax the value of inventory, you will get less inventory. Large corporations hire batteries of lawyers to find loopholes. While there is an incentive for certain types of corporations to plow profits back into research and development, many financial institutions and non-producing corporations would prefer to pay themselves any excess. It would be much better to tax these payouts than the corporate profits. Many of the companies that do pay taxes, like utilities, are highly regulated by governments that build tax revenue into their monopoly status. But it is well known that monopolies do not invent new technology.

All of these efforts to tax labor and capital can be compared to taxing seeds rather than fruits. Capital and labor are required for production, if you tax it, you get less production. In a global economy, other countries can out-compete U.S. facilities if they have lower income taxes and corporate taxes, or none at all.  Taxing capital and labor is like taking a percentage of seeds the farmer plans to sow in the field, then occupy some of his time when he should be cultivating and harvesting. The farmer will develop a lower yield.

A sales tax taxes the fruits. A sales tax in a U.S. store will tax the Chinese-made product and the American-made product at the same rate. This creates a level playing field and less incentive for global corporations to move to where their production facilities are taxed less. Not only will they be able to produce goods for less at home, but now U.S. products (fruits) have the same built-in tax as the same products made in other countries.

In a global economy, the U.S. tax code is a dinosaur, with perverse and selfish incentives taxing labor and capital.

The rise of the global economy changed all the rules. U.S. corporations wanted global free trade to liberate them from U.S. legal constraints. They can now easily migrate to where the market dictates, not where politicians dictate. However, if politicians would better understand real economic incentives and not only on the force of law, they would see that many popular political plans–like funding economic research–are perverse and will set us backward.

A politician may feel powerful if he patronizes a research fellow. He might tell himself that he is doing something worthwhile and get the press to promote it. However, the reality is that government sponsored research is command oriented and therefore opposed to innovation. It also sets up quasi monopolistic industries that use taxpayer dollars to force competitors that would be genuinely inventive out of the market.

Governments do have a legitimate role in regulating an economy, but this role is to prevent people or groups from abusing one another with economic power. Laws can tell people what is wrong and socially harmful and punish them. Laws can create level playing fields. Except for after-the-fact prizes, government money, except to fund the justice system to implement the law, cannot be easily thrown at research. All you tend to get is eternally dependent bureaucratic fiefdoms that follow the laws of command. To get genuine innovation, you need government to get out of the way and let the economy work.

Once a corporation develops a large bureaucracy, or is bought by a holding company, the original incentives of its founders disappear. Bureaucrats, whether in a government or a corporation, tend to follow commands. Mergers and acquisitions do not invent anything. If anything, they seek to destroy innovation that would be competition to an existing profitable market. We do not have time to discuss all economic incentives in a short article, however, we must understand that every person, whether in government, a small business, or a large corporation, wants to continually improve his lot in life. A manufacturing firm can improve a person’s status by creating more profit by contributing goods that increase the total value of the economy (GDP). A government employee, a lawyer, or financial institution on Wall Street can only get more wealth by withdrawing it from the economy. Therefore, increasing such activities slows down an economy.

Unfortunately, both large financial institutions and our governments have centralized wealth and power so much that they overburden the economy to the point of decline, and perhaps impending collapse. They should perhaps be broken up like “Ma Bell” into seven “Baby Bells” (cell phones and the internet only developed after this). Devolving large financing corporations and governments into smaller units would do much bring back the kinds of competitiveness required to meet the challenges of creating a robust economy and full employment.