In recent days it has been popular to attack General Electric Corporation for not paying any corporate taxes on the $14.2 billion in profits it made last year, $5.1 billion of which was made in the U.S. When the country is so badly in debt, it is easy to become insecure and hysterical and to look at any source of money and go after it, like a hungry wolf. However, this is a non-rational form of envy. Not only is envying the wealth of others a sin according to the Ten Commandments, in the case of corporate taxes it is economically unwise. In fact, corporate taxes and tax breaks are part of our social sickness, not the cure. In fact General Electric received a tax benefit of $3.2 billion last year as a result of this sickness.

(Reuters) – Most U.S. and foreign corporations doing business in the United States avoid paying any federal income taxes, despite trillions of dollars worth of sales, a government study released on Tuesday said.

The Foolishness of Corporate Taxes

It is foolish and counterproductive to tax corporations. Because corporations are driven by economic principles, rather than political ones, they will go to great lengths to avoid taxes. Here are a list of things corporations would usually rather do than pay taxes:

All of these behaviors are a result of natural economic responses to present government policies. In my opinion legislators are directly to be blamed for General Electric’s tax avoidance. Causing corporations to engage in the above behaviors is poor government policy. Rather, if governments understood economic principles, instead of committing the sin of envy, they would enact policies that tapped completed economic activity not the production process. What would such policies look like?

In other words, it was Keynesian economic theories and not neo-classical economics that enabled General Electric to make such huge profits. It was incremental tinkering with the laws that eliminated a competitive market. This tinkering has been done ever since the Civil War through Supreme Court decisions and legislation aimed at consolidating economic power in the hands of elites rather than allowing all citizens equal economic opportunity through fair competition. As Hayek said, the role of government in the economic sphere is not centralized management of business but “planning for competition” (Road to Serfdom, p. 42).

Fair and competitive markets in the banking industry would create thousands of small banks and bring to an end the phenomenon of banks too big to fail. Fair and competitive markets in health care would create better service at lower prices rather than “too big to care” rationing of life insurance companies and government agencies. After government agencies that manage health care are created, they behave according to political and economic motives and do not place the lives of citizens first.

As an economist would expect, nearly all corporate taxes are paid by corporations that are able to obtain excessive profits as a result of government regulation that protects them from fair competition. For example, utilities. Such taxes are a result of “you scratch my back, and I’ll scratch yours” agreements.

Tax the Fruits not the Seeds

A slogan I used in my book, Life, Liberty, and the Pursuit of Happiness, Version 4.0 is “Tax the Fruit, Not the Seeds.” Taxing corporations is like taking seeds from a farmer before he plants them and creates a manifold yield for harvest. A wise agrarian government would take a portion of the harvest and let the farmer have all his seeds. The same is true of industry, the government will reap greater income by taxing the fruits of corporate production by taxing the profits that individual take out of the corporation by way of salaries or dividends.

It is important to note that income taxes on labor used to produce goods is also counter productive as it is a tax on the “seeds” rather then the fruit and it causes the price of goods to be higher and less competitive on a global market. Other countries, if they are smarter, will not tax labor but the sales of goods. Then they can offer their goods at a lower price globally.

To some extent the U.S. government was able to get away with corporate taxes and income taxes on labor before globalization, when the U.S. economy was rather self-contained. This is because capital could not productively flee to other countries, and because all labor was taxed at the same rate. China, on the other hand, entered the global economy after it gave up on communism in the 1980s and has been able to create a tax structure more appropriate to a global economy.

Today, Americans create products that cost more than Chinese-made goods, not simply because the Chinese work for less money, but because more than 30% of the cost of U.S. labor is taxes. On the other hand, if there was no income tax on labor, and a federal sales tax of the same rate on Chinese-made and American-made goods, then the U.S. government would not be giving the Chinese such an unfair market advantage. As it is, our tax policies are shooting ourselves in the foot.

Of course, the United States has other regulations, for example related to safety and pollution, that make it harder to produce goods domestically. Further, class-action lawsuits and high damage awards for malpractice and unsafe products is another reason not to produce in the United States. In these areas we have to learn to separate safety from envy, for most people want a clean environment and safe products, but many of the winnings of such suits are motivated by envy and greed. We do not have the time or space to discuss this topic in this article.

The Problem of Mass Envy 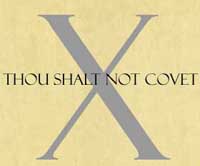 Thou Shalt Not Covet Corporate Profits

The main point I wanted to make is that corporate taxation is foolish, counterproductive, and proof that a society must obey the Tenth Commandment “Thou Shalt Not Covet.” Ancient societies learned that just like “Thou shalt not kill,” and “Thou shalt not steal,” violating the command “Thou shalt not covet” will bring about social collapse.

We live in a scientific age and many people believe that these ancient commandments can be ignored because they are contained in pre-scientific works of literature. However, as Santayana said, “Those who fail to learn from history are doomed to repeat its mistakes.” Corporate taxes are rooted in envy, pure and simple; they make no economic sense and have caused much of the economic injustice that we so dislike.