Do not rejoice when your enemies fall, and do not let your heart be glad when they stumble. 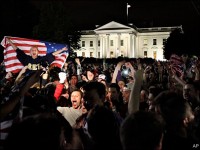 Jubilation in front of the White House after the announcement of the death of Osama bin Laden.

The jubilation in the U.S.  seems in some way parallel to the jubilation by Islamists in the Middle East after the towers came down on 9/11. Americans were suffering great pain and considered such celebrations very callous. We looked up to those many Muslims who we believed to have a higher consciousness, those who were more somber after 9/11 and expressed sympathy and grief for Americans who lost loved ones. Do we feel sympathy for the relatives of those who died and belonged to a group that professes to be our enemy?

The jubilation can be seen as an instinctual response of solidarity and national relief, but it is the sort of nationalism that perpetuates war and, on a psychological level, not that different from those 2001 jubilations in the Muslim world.  At that time, many in the West argued that this was a sign that Muslims needed to enter the modern age, and learn to live people of different cultures in a world of pluralism and tolerance. Is the jubilation in the U.S. yet another sign that Americans have lost the moral values and virtues promoted by the Judeo-Christian culture of the United States?

By raising this question, I am not equating the response to the rightness or wrongness of the two actions. Clearly, the 9/11 attack was a wrongful attack on innocent people. The killing of Osama bin Laden can be viewed as an act of justice. But justice is different from revenge. True justice follows due process and treats everyone equal before the law. If the story of bin Laden’s death I have heard is correct, the Navy Seals first demanded that bin Laden be handed over, and that he and those in his compound were only killed after he resisted and a gunfight ensued.

Also, a higher consciousness should keep in mind that some of those killed may have been innocent of the 9/11 attack. As fellow human beings, whether they be judged as innocent or complicit, we should have sympathy for their families  and pray for their souls.