↓
Home→Articles→Culture→Rethinking Welfare: A Road to Hell or Prosperity? 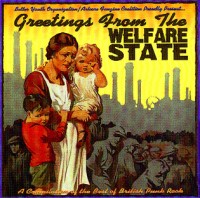 A portrayal of welfare as the Road to Hell

Welfare is an important topic that has become divisive in Western politics. In the name of compassion, liberals are supporting the need for social welfare. However, many of the welfare programs they have created have encouraged social dependency and family breakdown, undermining the long-term sustainability of society. Conservatives have reacted with attempts to defund these programs, but they often sound harsh and uncompassionate when they advocate leaving the problems to voluntarism.

In the nineteenth century, before the development of public poor houses and welfare programs, many people who were unchurched received no help from the churches. Immigrants flooding through Ellis Island and concentrating in poor ethnic neighborhoods were too large in number for the churches in established communities to care for. Social compassion demanded that something be done to help these people in need.The problem is that a system developed that became a road to hell paved with good intentions.

The real question is how to provide welfare in a way that promotes growth and maturity of the recipients rather than social dependency. When the government pays women to have out-of-wedlock children, you get more out-of-wedlock children. Statistically, these children enter the world with less opportunity for success. When you provide subsidized food and housing adequate for a subsistence lifestyle, you get more people living a subsistence lifestyle, and the government buys a growing underclass that costs more to support each year. If you pay bureaucrats based on the headcount of the number of people in a welfare program, you motivate them to keep more people on welfare. These are perverse incentives structured into programs rooted originally in compassion: it is just poorly directed compassion, the type that paves a road to hell with good intentions.

Historically churches and voluntary organizations have had a much better track record of getting people out of dependency and back on their feet than governments. They are motivated out of love for a person and want to see them succeed. The problem is that they have not been able to care for everyone. On the other hand, government programs that attempt to care for everyone have been impersonal,  expensive, and have fostered dependency and a growing welfare class, including a class of dependent bureaucrats that manage the programs. We should think about other systems of welfare. Some ancient temples serve as examples that can stimulate new thoughts about how our present systems can provide welfare to all that is less expensive and serves the purpose of helping people become self-sufficient.

The Babylonians had a system that existed over 1,000 years, much longer than our experimental Western systems. Babylonian temples were not simply places of pagan religious worship. They were surrounded by significant areas of land that could be farmed collectively by refugees, widows, and abandoned children who would find safe haven on temple grounds. Those who could work provided food and housing for all, and those who could not might beg for alms. Basket weaving, rug-making, and pottery might be crafts learned by transients who could acquire a skill while getting an income from sales for the temple, or for themselves after they left. Temples also served as hospice for those dying and without family. Living in these communes was not so desirable that people wanted to stay there, but it was also a system that kept people from becoming vagrants or dying in the streets. And, it was motivation to re-enter society as a responsible citizen.

The Babylonian system did not promote out-of-wedlock births, it did not encourage breakdown of regular families, and it did not drain the country’s coffers—although the kings often made sizable contributions for land and building maintenance. Today, the issues of separation of church and state might be brought up as a reason not to fund such enterprises, as what we would call religion played a role in the temples to promote the moral behavior necessary for those on the temple land to live peacefully together.

If you examine this portrayal of the Babylonian welfare system from the standpoint of economic motivation, it seems far superior to welfare state handouts that end up causing family breakdown, welfare dependency, ghettos that turn to rioting, and ultimately government bankruptcy. This system could also be just in that it did not deny the needy based on race, religion, or ethnicity.

It is not simply the economic weight of government bureaucracy that the welfare system has increased, but the increase of taxes to support it has been driving out the businesses that traditionally fueled the economy, creating a two-pronged economic collapse.

A system of compassion with much better incentives needs to be developed for modern society than what we presently have in the West. While modern society differs from the agrarian society of ancient Babylon, we should examine the incentives of the Babylonian system. It was a form of welfare for work, for those who could work, yet it was a safety net for those who could not. It created a type of extended family among people not biologically related. The standard of living was strict and more like monastic life; it was not an environment that would promote an underclass with second and third generation welfare dependency. It was not a system that allowed the idle behavior that leads to the formation of gangs and criminality. It was a system that helped those who want to get out of it.

One can imagine that graduates of such a temple system, like those who complete Alcoholics Anonymous and alumni of colleges today, would be inclined to provide financial support when they get on their own feet.

Creating a public welfare system along these lines might be difficult in a spoiled society, addicted to deficit spending. Our culture has trained welfare recipients to be happy to take subsistence money without work. And, we have generated welfare bureaucracies that are equally dependent and fearful to change. Some policymakers will argue that new programs will only be able to emerge after the collapse of the present social system. But, such a collapse based on our fear of change could lead to untold suffering and death. However, the creation of such public welfare communities would be a liberal-conservative compromise that would lead to a long-term reduction in the size of the welfare state and the expenses that lead to government bankruptcy.

Further, the reduction of corporate taxes levied to prop up these current unsustainable welfare programs, would lead to the return to the US of over a trillion dollars of corporate capital parked overseas. This could lead to the formation of jobs available to those who now seem perpetually stuck in a jobless society, even when they are capable of working.