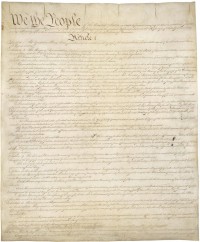 The purpose of a constitution is to regulate the flow of power, not to pass laws

In recent years, particularly in the state of Minnesota, constitutional amendments have become viewed as an alternative method of passing legislation when it is threatened with an executive veto. Such amendments get placed on the ballot by the legislature for a voter referendum. If passed, they become law with any action by the governor. The problem is that the purpose of a Constitution is to establish the parameters and machinery of government, including how legislation gets passed, and rights of citizens that must be protected—not as the vehicle for passage of individual laws.

The purpose of a constitution is not an alternative place to enact taxes or laws relating to the specific goals of political factions or interest groups. That is the purpose of the legislature, and a governor’s veto is an established check on the power of the legislature designed to ensure that bills serve the interest of all parties before getting signed. If a bill cannot get enough votes to override a governor’s veto it should be killed. Our founders did not intend contentious issues that had a simple majority to be an adequate form of government as it does not protect the people from what they called “mobocracy.”

The Supreme Court has an obligation to strike down legislation passed as an amendment to the Constitution, when it is not designed to alter the flow of political power, define limits to government power, or enumerate the rights of citizens against the government—for example the protection of minorities, or of free speech. However, the Courts have failed to strike down such legislation, allowing laws promoting special interests to become attached to constitution like a cancer in the human body in which the cancer cells feed of the body and multiply without performing their intended purpose.

In Minnesota the Democrats started it, but Republicans magnified it

Although discussions of such amendments as laws came to the floor earlier in recent history, the process began in earnest in Minnesota in 2008 when democrats Sen. Pogemiller and Rep. Sertich pushed through a constitutional amendment on behalf of democratic lobbies to dedicate a sales tax to the arts and the environment, known as the Legacy Amendment, in order to get around a veto by then republican Governor Pawlenty. The success of this measure has led to attempts by the current republican legislature to get around democratic Governor Dayton’s veto by attempting to place four constitutional amendments before the voters. These include the definition of marriage, voter ID, freedom of employment, and the right to bear arms.

Some of these measures, like voter ID, are about the process of governance, but others, like a definition of marriage don’t either define the flow of power or a human right. They are simply ways to try to get something a faction wants through abuse of the system. The legacy amendment was clearly an abuse of the system because it used the citizens to pass a law to enact a tax for a specific purpose. This is normally what the legislature should do. It was not only passed for factional purposes but it set up a flow of money to new bureaucracies, not a flow of power in the machinery of government. Further, it was bad legislation in that some people ended up receiving checks as a result of dividing up excess money raised by this bill that had no need of the money. And, the funds were denied to more legitimate environmental needs, for example stopping invasive Asian carp.

Now the situation exists where labor unions, environmental activists, religious conservatives, and other factions are forcing legislators to try the “amend the constitution” route when the constitutionally defined process of passing  legislation doesn’t get them the result they want.

Following Montesquieu, the most quoted thinker at the US Constitutional Convention of 1788, James Madison argued that gridlock should be the normal state of affairs and that only legislation should be passed that serves the interests of the entire population. The idea of having a lower house that represented the interests of the people and a Senate that represented the interests of government, was a way of insuring no bill would be passed that either represented just the common will or the will of those in power. They imagined very little legislation actually getting passed, keeping government away from supporting factions through the taxation of citizens.

Special interests have sought to go around the checks and balances the founders designed ever since the government was created and, as I explained in Life, Liberty, and the Pursuit of Happiness, Version 4.0, the 16th and 17th Amendments to the U.S. Constitution enabled the Federal government to escape the check on its power by the states, effectively torpedoing the idea that the United States was a union of states, effectively turning the states into provinces of one big federal state with a monopoly on power.

The recent  attempts in Minnesota to do an end run around the governor’s veto, when there is not wide enough support to override a veto, are launching a torpedo at the Minnesota system of government. This should be stopped, and gridlock ought to be viewed a good thing.

What would be a good Amendment?

Some would argue, “but what about a government shutdown in the event of gridlock over a budget.” Perhaps this is where a constitutional amendment would be legitimate, an amendment that would say, “in the event that the legislature fails to pass a new budget, the previous budget shall remain in effect.” Now that would be an amendment that belongs in a constitution, because it (a) allows for smoother functioning of the government, and (b) would protect the citizens by preventing special interests from holding government services hostage to their special-interest legislation.