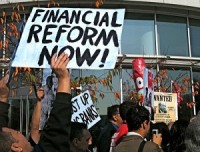 Americans Asked for this, What did they get?

Who Regulates the Regulators?

The people who brought us the 2008 bailout for the real estate bubble, have now brought us the government intervention necessary to create a “consumer bubble.”  The Dodd-Frank Act, signed into law on July 22, has now created the Consumer Protection Agency. That sounds good doesn’t it? We want consumers to be protected from financial industries. The problem? The fox in the hen house is saying he has a new strategy for protecting the hens. We want financial reform, we need financial reform, we are getting financial reform–but is it the right reform?

Real reform puts real checks and balances in place and would prevent the types of  greed and government intervention in the economy that produces financial bubbles. This bill fails to do that. President Obama said the Dodd-Frank Wall Street Reform and Consumer Protection Act “represent[s] the strongest consumer financial protections in history.” This is enough to worry any savvy student of history who knows that almost every government financial guarantee has caused a bubble. We should remember what federal home loan guarantees, coupled with greed, did to the housing market.

Lets look at a couple pieces of this bill. First, we have a Bureau of Consumer Financial Protection placed within the Federal Reserve–an organization that refuses to be audited. How can consumers hold such an agency accountable to them? They can’t. From the Wall Street Journal, we also learn that the Federal Reserve will fund this office that shall be able to unilaterally write rules governing credit:

[The Bureau of Consumer Financial Protection] will be funded by the Federal Reserve and have independent powers to write and enforce rules governing how loans and other financial products are offered, bearing on everything from the type of mortgages people can get to the fees on their credit cards.–WSJ, July 22, 2010

Imagine, this new agency is endorsed by the “transparency President”! One centralized organization, unwilling to submit to an audit, controlled by the largest private banks, writing all the rules for banking! Independent? Transparent? It may be new, but it is not independent, its host isn’t transparent, and checks and balances are hard to find. It is difficult to expect accountability if someone outside the Federal Reserve doesn’t control the purse strings. Greed and conflicts of interest might better be regulated by laws written by Congress and prosecuted under the judicial branch.

Let’s look at another new office. This act will create a new Office of Investor Advocate within the Securities and Exchange Commission (SEC). That’s right, the same organization whose “regulators” looked the other way because the head of the SEC was one of our “experts” rotating between being head of a financial industry and the SEC, and had a personal incentive not to regulate the industry that made him wealthy. (See: Reforming Regulatory Agencies.) The SEC office of Inspector General, another “independent” regulator of regulators, has come up with information after disasters have hit, when asked to report. But it doesn’t have a history of preventing any abuse or corruption. We should expect similar results from this new office.

The normal cycles of individual businesses are disrupted with the death of an owner, or the obsolescence of a product. In the normal affairs of life, the collapse of one business has little effect on the economy as a whole. However, macro-economic cycles can bring all businesses down at the same time, wreaking havoc on economies and millions of lives. Such cycles are related to government intervention or the lack of financial protection.

This macro-economic regulation is the purpose of the Consumer Financial Protection Agency. But, it is set up as a self-regulating agency with virtually unlimited economic power. Not only is creating an agency with such powers that are conflicts of interest in themselves (funding comes from the  industry it is supposed to regulate), but the very form of this type of agency–similar to the SEC, FDA, FAA, FCC–has not worked to properly regulate other industries. The structure itself is flawed. It assumes such an agency can be self-regulating and that, like the “new Soviet man,” the people in it are less susceptible to corruption than the general populace because they are experts. But incentives in such agencies are not properly structured.

Further, regulatory agencies become aware of problems only after they occur. Take for example the stock market. You might hear of a “good investment” in the newspaper, but by the time it hits the newspaper the shrewd investors have already placed their bets, and then a herd mentality drives the market up enabling early investors to take their profits. A government agency, like Congress, responds to the pressure of the herds. Agencies do not anticipate the market or a large social disaster.

Once such a disaster occurs, Congress should be able to write a law that punishes people who violate sound economic principles. They don’t need an agency for that. But, they create them anyway to tell voters they did something.

Today most elected officials are elected for political purposes, not because they actually have the capacity to solve our nation’s problems. They represent you and me in Washington and we expect them to do something when a problem arises. Both their abilities and our expectations are flawed. This is a weakness of our representative form of democracy.

So what happens when a problem arises? We ask Washington to fix it (first mistake), then Washington creates an agency to solve the problem (second mistake).

The first mistake arises because our democracy was created for self-governing and independently responsible citizens. The U.S. Constitution was designed for such people, and this is why Ben Franklin told a citizen, “We have given you a Republic, if you can keep it.” However, we have lost that independent spirit that freedom and democracy require.

The Founding Fathers set up a system of federal government in which the only direct relationship individuals had to it were: money, the post office, passports, and military service. The Federal government was to be a union of states run by citizens. The Federal government would only provide common security and govern relations among states. Today the government collects taxes from individuals (16th Amendment), has eliminated state representation in Washington (17th Amendment), and is in the process of creating national ID cards and turning the states into administrative provinces.  How its role got stood 180 degrees on its head can be understood by reading my book, Life, Liberty, and the Pursuit of Happiness, Version 4.0. 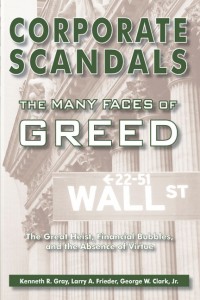 In 1935 the SEC was created as a response to the collapse of the stock market and banks. It has done little to regulate the financial industries because it is structured as a self-regulating appendage of an industry that neither Congress or the President adequately understood.

However, Congress created the Glass-Steagall Act in 1933, a law not an agency, that had real teeth. This is because it did not pass the problem of regulation onto another body, but passed a law consistent with the principles of the US Constitution that separated conflicts of interest and prevented massive consolidations of financial industries. But in the 1999, during another period of economic boom, under the Presidency of Bill Clinton the Glass-Steagall Act was repealed to make way for the merger of Citigroup and Traveler’s Insurance, and reopening a Pandora’s box of oligopoly and corruption.

The Glass-Steagall Act worked because it was a law that prevented economic conflicts of interest, much like the separation of political power in our three branches of government. More of this type of legislation, and fewer agencies, is what we require of Congress. However, the new agency will not restore the Glass-Steagall act–another reason to suspect it may be smoke and mirrors.

The Iron Cage of Bureaucracy

Agencies are easy to create but nearly impossible to dissolve. They form some of the strongest lobbying groups in Washington because they are the children of Congress and depend on their annual budgets. In his nomination address for Sen. Goldwater in 1964, Ronald Reagan argued that “there is nothing closer to eternal life in this world than a government bureau.”

Nineteenth Century sociologist Max Weber, an expert on the study of bureaucracy, understood that it is easy for democracies and liberal governments to create bureaucracies and nearly impossible to prevent them from growing or to bring them to an end. If a bureaucracy fails, rather than replacing it, new ones are created to assist them. This ongoing bureaucratic expansion of more and larger agencies, that independently create rules and regulations that govern our lives, and that take larger and larger budgets each year, gradually displaces democracy and freedom imprisoning the citizens and their representatives in an “iron cage of bureaucracy.”

Weber quite accurately predicted that communism would fail in Russia because it would create such an iron cage. The same dynamic is at work in the United States today, even though it doesn’t go by the name of “communism.”

The Soviets created a “new class” of bureaucrats that Michael Voslensky wrote about in Nomenklatura: The Soviet Elite, An Insider’s Report. In the Soviet Union, Stalin kept a personal name list (the literal translation of “nomenclature.” These were people he viewed as loyal supporters. They had no special skills for the jobs they occupied, but they inherited the rule of the Soviet Union because of their faithfulness. Only their descendants were allowed into the inner circles of the nomenklatura that used the Communist Party as a wider front, but the educated and qualified people who challenged the system were executed or became slave labor in the gulags. We don’t have active gulags in the United States at the moment, but there are many similar conditions in which parasitic bureaucracies have created an “iron cage” for the rest of the population.