↓
Home→Articles→Economics→Production and Consumption: The Yin and Yang of an Economy 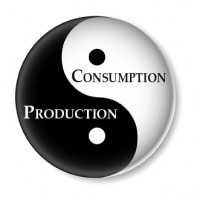 Production and Consumption, the Yin and Yang of the economy

The problem with current U.S. economic models is that they focus on consumption. This model is reflected not only in many recent economic “stimulus” plans like auto and appliance rebates, subsidized home mortgages, and government jobs programs, but it is embedded in a U.S. tax structure that deters production in the U.S. and stimulates U.S. companies to produce many products oversees. Implicit in this tax structure is the idea that the United States is a consumer society and that we can endlessly consume without producing enough to pay for it.

In reality they both drive one another, but production takes the first step. It is known, for example, the cities with more heart surgeons have more heart surgeries per capita. Supply creates demand. Without surplus goods or services to offer, people might not even know they existed. On the other hand, the lack of something you would like to have causes invention of new goods and services, so from that standpoint consumption drives production. Thus, an economy contains a reciprocal  give and take process, roughly outlined by Adam Smith in the argument that you need to produce something above what you consume yourself and offer it for sale to create a profit from which you can buy of the surplus of other producers. By being a producer, one is able to become a consumer.

Homo Erectus is considered to be the first hunter-gatherer

The development of agriculture led to the possibility of non-Malthusian societies that are sustainable over long periods of time. In such societies human consumption is supported by human production that exceeds that of the natural world. Agriculture that produces more food than found wild is considered the basis of civilizations that support larger populations and allows for the division of labor into technical,  military, and other fields of  work. The agricultural developments in the Fertile Crescent are often considered the basis for modern civilization. The irrigation provided in Nile Valley in Egypt, the Indus Valley in India, and the Huang He (Yellow) and Yangtze allowed other great civilizations to develop.

Despite all the developments of literature, science and technology in modern civilization, at the foundation is a system in which production keeps pace with consumption. The United States began as a nation of  family farms and shops, in which about 65 percent of the population was engaged in small sustainable family farms. This could be called a simple society where most people were self-sustainable.

Advances in technology, like the invention of the tractor, combine, and artificial fertilizers made it possible to grow more food with a smaller percentage of the population. By the late 20th century, less than 3 percent of the population was required to grow all of the food necessary for its 300 million people. However, the 97 percent that do not grow food much engage in other productive activities that produce other products or services that people want or need, or they will not have any money to trade for food. Such societies are complex societies and required a system of distribution of labor in various productive enterprises.

Like the difference between a single celled organism and a human body, complex societies contain many social organs that simple agrarian do not need. Factories, schools, governments, churches, and NGOs are all possible because of the ability of the agricultural sector to feed all of them. The economic system and money supply is like the blood that flows throughout the body from one organ to the next enabling them all to live. Ideally, the government is like the central nervous system that regulates the entire system though a system of feedback.  It needs to be a system that makes sure that there is enough production to fuel the consumption of the cells in the entire body.

The role of a good government is to protect a society from aberrant behavior that destroys the production/consumption balance. 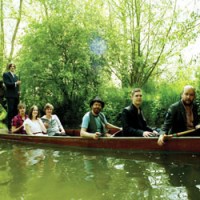 A leisure society can develop when production of basics is harnessed

In practice, civilizations have declined before becoming leisure societies because some individuals consolidate power or wealth in ways that prevent others from even pursuing a basic agrarian existence, effectively discarding them, cutting them off, or turning them into refugees.

The Decline of Civilizations–Consumption Outstrips Production

Maggots on a carcass consume without producing

The decline of civilization, or the breakdown of the system occurs when greed and selfishness rule—when individuals desire to consume but not produce. This is what Hobbes called “the state of nature,” which is also a state of war. Selfish individuals, like maggots on a carcass, want to consume without producing. Such individuals in a human society might also be equated with cancer in the human body since cancer cells consume and grow an aberrant mass unrelated to the function of the body itself and kill the cells adjacent.

This occurs when government fails to perform its role of protection and regulation:

All of the above reflect the dominance of “the state of nature” over an acceptable social contract. They degenerate into a state of war within states, whether this be tribes like the Hutus and Tutsis in Rwanda, fighting over the instruments of the state power or political parties like the Republicans and Democrats in the United States today. In both cases, those contesting for power are seeking to control resources for themselves at the expense of those in the other groups. In such cases, consumption through plunder rather than as a result of surplus production, is the strategy. In the United States there is a growing backlash in the middle class, which has now become lower-middle class, as big government and big industries have fed off of the work and live savings of hundreds of millions of willing United States citizen-producers who have been overtaxed, marginalized, and find themselves highly skilled but unemployed.

The Rise of China and the Decline of the United States

A basic understanding of the social and economic principles that underlie the rise and fall of civilizations makes it easy to understand why China is Rising and the United States is in decline. China, after throwing off imperialism, and then communism, sought to decentralize power and return to a market system, rewarding production. The United States, after generations of production, has turned into a society of consumption and, ironically, given much of the production to China. China is increasing production and moving to a healthier yin/yang economy. The United States is increasingly adopting a consumer (maggot) mentality.

The United States has started its decline because the government, the social organ that is supposed to regulate society the way the brain and the central nervous system regulate a human body, has become cancerous. As a result it has become a consumer without being a contributor to the overall health of the body. It has let corporations run uncontrolled, welfare run uncontrolled, and encouraged plunder from other nations through military exploits. This has to be stopped or the fate of the citizens of the United States will be like the fate of maggots when the carcass left of the healthy body our ancestors nourished is consumed.

I wrote Life, Liberty, and the Pursuit of Happiness, Version 4.0 to explain ways in which the U.S. decline can be reversed and health restored to the system. It lays out the basic principles of good governance and suggests ways to restore them in the United States. Whether these principles get applied in the United States is another question that is up to its citizens to decide.