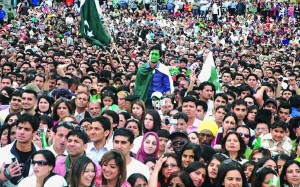 The Middle Class in Pakistan demands social change. Will it be reactionary, revolutionary or integral?

The large budget deficits by governments at all levels and increasing income gaps between the rich and the rest are the result of poor fiscal management and regulation by governments. We hear increased emotional rhetoric as 1) people paying taxes can no longer tolerate government waste, 2) people receiving government checks are threatened to get cut off, and 3) people who work hard to earn a living are watching both governments and financial industries taking or destroying their savings and investments.

This anger is known in sociology as the Frustration-Aggression hypothesis.(1) Human beings, especially in their earlier stages of emotional and moral development, react to frustrating circumstances physically, often lashing out as a perceived enemy. Youngest children often simply throw uncontrolled temper tantrums and lash out at the nearest object. As we learn to reason and rationalize, we make war on our perceived enemies. This warlike response within a society usually takes the form of reactionary or revolutionary behavior.

Reactionaries are those whose comfortable world is being threatened by others. They generally had a decent life which they have enjoyed and feel is threatened by those who challenge it. Reactionaries could be scriptural fundamentalists like the Christian Right or Islamists, corporate managements threatened by labor unions, or government legislators, both left and right, creating special interest legislation challenged by citizens like the Tea Partiers and Environmentalists.

Both reactionaries and revolutionaries create war and violence and they justify their positions through rationalizations that can often be viewed in the campaign ads between Republicans and Democrats today. Because most Americans have been disengaged from politics and never learned real reasons for our budget deficits, or faced up to our cultural addiction to credit, our budget deficits are creating a climate of frustration where immature responses rule the airwaves and the debates, causing hostile and emotional conflicts.

The rhetoric of the Republicans tends to be reactionary. “No more taxes.” “Cut welfare spending.” However, you seldom hear solutions from them that address income disparity, even though much income of the super rich is derived from the work or investment of the middle classes, and their own wealth is often the result of some form of corporate protection from poor government regulation.

The rhetoric of the Democrats tends to be revolutionary. “Tax the super rich.” “Welfare for everyone.” However, you never hear anything letting you know they have a clue about how things are produced, where money comes from, or why hard work is important. Generally, democratic polices tend to spread poverty equally to everyone as businesses flee to other states or countries, creating more unemployment and a smaller tax base to care for more welfare recipients.

The mature approach to budget deficits is integral or constructive. It understands weaknesses in both the rhetoric of reactionaries and revolutionaries. Rather than reacting with violence or theft, integral thought seeks to gradually restructure society and laws for greater justice in ways that at the same time enable greater economic production.

Neither the economic theories of laissez-faire nor Keynesianism lead to integral economics, both contain some truth and some errors. The libertarians are correct that government cannot produce anything and ought not manage or interfere with the operation of businesses. However, an unregulated economy leads to oligopoly and an unlevel playing field. Keynesians are correct to believe that government has a role in regulation, but its true role is that of a referee, not of economic planner.

An integral approach has to understand both how things are produced, and create a level playing field. In my book, Life, Liberty and the Pursuit of Happiness, Version 4.0 (pages 108ff) I refer to the regulation of highways as an example of allowing everyone to play fairly. I use the example of a football game to show why the referee should not try to plan the outcome of the game. I also recommend replacing income taxes with sales taxes because they do not penalize production and drive industrial production out of the United States (which has the second highest corporate income tax rate in the world). On the other hand, consumption taxes do not directly deprive people of the fruits of their labor, and those who have more to spend will pay more taxes–especially on luxuries.

However, one of the core problems is the two party system that now largely puts reactionaries in control of one party and revolutionaries in charge of the other. This is accomplished by campaign contributions through PACs and corporations that essentially control the platforms and candidate selection for the two parties. Many normal citizens, who learned both how to control their own budgets and care for their neighbors are far more integral in their daily lives than the factionalized party system.

Our party system more reflects a war over control of government by tribal interests, more like the conflict between Hutus and Tutsis in Rwanda, than a democratic republic in which the citizens’ wishes are reflected in the policies of their legislators. Neither party cares if the average citizen suffers, so long as they control Washington. The standoff between Congressman Baynor and President Obama reflects this factionalized strife, and President Obama’s rhetoric reflects that of a frustrated revolutionary, not an integral thinker.

In his Farewell Address, President George Washington warned of the dangers of party factionalism taking over the government, and he also warned of Constitutional Amendments that would serve the cause of this factionalism. In my book I explained how the 16th and 17th Amendments, as well as many Supreme Court decisions such as Santa Clara County v. Southern Pacific Railroad destroyed many of the constitutional checks and balances our founders put in place to prevent the political centralization and factionalism. Washington’s Farewell address used to be required reading for public school students because it served as the basis for understanding weaknesses to the political system that need to be fixed by constructive laws, not taken advantage of by selfish interests. We would do well to reintroduce this speech as required reading in our classrooms today as part of the education of responsible citizens. Washington was an integral thinker as should be all citizens, and particularly their representatives.