Separation of Church and State

Americans are proud of their heritage of separation of church and state enshrined in the First Amendment to the Constitution: 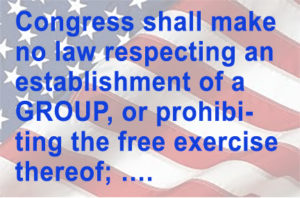 This amendment provides a foundation for pluralism and the equal protection under the law of all citizens. There was a practical reason for this Amendment; many of the states were settled by people of different religions: Puritans and Congregationalists in  New England, Dutch Reformed in New York, Catholics in Maryland, Anglicans in Virginia, and Quakers in Pennsylvania. People in one of these states would not endorse a government in which the religion of another state was the official religion of the land.

Religious Identity was the Primary Aspect of Identity

At the time of the founding, cultural identity was primarily religious. People had different levels of wealth, education, or political power, but these identities were not the ones that potentially divided people. When the First Amendment was proposed, there did not exist other major identity groups that commanded loyalties—corporations, LGBTQ, political party, racial groups, etc. To the extent these existed, they tended to be subsumed by religious cultures.

The result was that “religion” was the primary form of identity that concerned the Founders and the Signers of the Constitution. They did not anticipate the rise of other groups with ideological suppositions held as firmly as religious doctrines, or with ultimate aims and goals that had quasi-religious ends.

All types of Identity Groups share many of the same characteristics

Most people today are aware of the quasi-religious nature of Marxism-Leninism. Marxist scholars had to pay homage to the works of Marx and Lenin in a manner that Catholic theologians like St. Thomas Aquinas had to conform to the Bible and Church doctrine, or Muslims to Mohammad and the Koran. Marxism even had its own version of eternal life for Lenin, whose body remained on display as a shrine until the Soviet Union collapsed.

Today members of political parties often behave the same way, reciting the tenets of party platforms without much independent questioning. The Kavanaugh hearings reflected this tribalism, as all Democratic representatives who felt collectively threatened by the nomination read from the same script, and shouted uncivilly when they had no other recourse. Identity groups, like Republicans and Democrats, vying for political power, are not content to obey the rules, but will do whatever it takes to control state power and use it for their collective ends, at the expense of everyone else.

The tribal rivalries we witness today between the political parties are very similar to the religious rivalries the Founders feared when they drafted the First Amendment. It did not take long to realize this problem. In his Farewell Address, President George Washington stated,

All obstructions to the execution of the laws, all combinations and associations, under whatever plausible character, with the real design to direct, control, counteract, or awe the regular deliberation and action of the constituted authorities, are destructive of this fundamental principle, and of fatal tendency. They serve to organize faction, to give it an artificial and extraordinary force; to put, in the place of the delegated will of the nation the will of a party, often a small but artful and enterprising minority of the community; and, according to the alternate triumphs of different parties, to make the public administration the mirror of the ill-concerted and incongruous projects of faction, rather than the organ of consistent and wholesome plans digested by common counsels and modified by mutual interests.

However combinations or associations of the above description may now and then answer popular ends, they are likely, in the course of time and things, to become potent engines, by which cunning, ambitious, and unprincipled men will be enabled to subvert the power of the people and to usurp for themselves the reins of government, destroying afterwards the very engines which have lifted them to unjust dominion….

The alternate domination of one faction over another, sharpened by the spirit of revenge, natural to party dissension, which in different ages and countries has perpetrated the most horrid enormities, is itself a frightful despotism. But this leads at length to a more formal and permanent despotism. The disorders and miseries which result gradually incline the minds of men to seek security and repose in the absolute power of an individual; and sooner or later the chief of some prevailing faction, more able or more fortunate than his competitors, turns this disposition to the purposes of his own elevation, on the ruins of public liberty.

Whether it be a fight among religions, among ethnic tribes, or among political parties for the reins of government, the result is the same. A Protestant, a Tutsi, or a Republican, it doesn’t matter. A Jew, a Hutu, or a Democrat, it doesn’t matter. If an organized identity group controls the state, it will inevitably use its power to direct state resources to its own members, aims, and ideology.

Congress shall make no law respecting an establishment of a group

The conclusion we can draw from this experience is that the Founders did not go far enough, or get explicit enough, in the First Amendment. Had they had the 20/20 hindsight vision we have today, they would most certainly have written,

Congress shall make no law respecting an establishment of a GROUP, or prohibiting the free exercise thereof; ….

Groups of all types form human identity. Human beings are social beings. It is our associations with others for community life, for sports, for clubs, for political and philosophical ideals that enrich us and give us purpose. However, when one group has the ability to use political power to tax others for its own ends, societies become extremely divided.

In my last article on this blog, I argued that one step to reduced some of this hostility would be to remove Party names from ballots. That is a practice that violates the principle of separation of all groups from the state. And that is a law that can be enacted by Congress, and does not require a Constitutional revision.

I suppose the Supreme Court could theoretically argue that the spirit of the First Amendment was be to interpret the definition of a “religion” broadly to include features of group identity that include political parties: beliefs, doctrines, organizational structure, making individuals sacrifice their own ends for group ends, etc.

It is not only Party names on ballots that establish groups (or factions), but processes in the Congress, like party caucuses held on government time and property, majority of parties determining leadership, etc. These practices are really no different than if they were Muslims vs. Christians, or Hutus vs. Tutsis. It is just that the groups are labelled “political” rather than “religious” even though they are factions either way.

A Revised and Clarified First Amendment is in Order

One of the viruses that has crept into the United States political system has been the establishment of two political parties entrenched in the government. Ultimately, the goals of the two parties reflect those people that fund them. The government gets sold to the highest bidder–something the founders sought to avoid.

Political parties themselves are not bad, so long as they remain in the sphere of “freedom of assembly,” for the can promote constructive change and impact the ideas that legislators–who should be representatives of citizens, not representative of parties. In fact the more groups are allowed to freely form, the weaknesses of government and the needs of society can be better address.

Today the two established political parties in the United States do not represent the citizens or the society as a whole, but the interests of their supporters. This is why legislation on health care, immigration, and other needs of the society as a whole cannot get a constructive hearing in Congress. Rather each side is determined what it can get for its voters, at the expense of the voters from the other side. The parties play zero-sum games that are not a win-win for the society. This dynamic appears to regular citizens as a dysfunctional Washington, or a swamp that needs to be drained.

A revised First Amendment that disestablished political parties, as well as religions and all other identiy groups, while allowing freedom of speech and assembly for all would go a long way toward rooting out the tribalism that has hijacked the American political system.

For any reader in another country contemplating a Constitution for a new government, consider the United States experience and put a clause in your Constitution that separates all groups from the state, not just Church and State.