Since the Columbine High School shooting on April 20, 1999, where 12 students and a teacher were killed, there has been increased concern over school safety. But the original intention to improve security at schools has morphed into anti-bully campaigns and legislation that have become increasingly hysterical and politicized. Anti-bullying rules and legislation can be viewed as cover for school officials, a gold mine for political activists, and feel-good activity for legislators. But most of this legislation is harmful to children, costly, and counterproductive.

Anti-bully arguments for campaigns and legislation are full of the rhetoric protecting children, but it’s generally harmful to them and prevents children from working through the normal testing of limits that occurs in childhood development. Imagine two children in the sandbox at a daycare facility. One grabs a toy, the other grabs back, the first one pushes, the second one hits. The second one (who did not grab the toy) is labeled the “bully” and the first one (who grabbed the toy) is labeled the “victim.” The “victim’s” parents refuse to talk to the “bully’s” parents anymore and withdraw their child from any activities the “bully” attended. The “bully’s” parents get isolated from the community. The bully and victim language not only was inaccurate in describing the social dynamic of normal childhood aggression, it labeled one child as evil and the other one as innocent. But worse, it prevented adults from using the situation as a teaching moment to help the kids learn to live with one another and become friends. 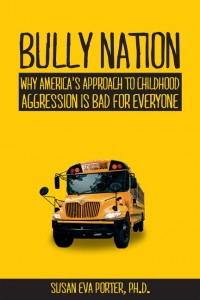 Our legalistic and political approaches to solve anti-bullying prevent the development of interpersonal relationship skills so necessary for productive adult life. Laws and policies of force cannot make people love, cooperate, or even tolerate one another. This requires a constant effort of adult investment in children to help them grow. Expecting laws to end normal childhood relationship dynamics and appropriate limits to aggression might say more about the lack of integrity of the adults passing the laws. Anti-bully laws prevent children from working through experiences that make them resilient. The government is not a substitute parent or teacher.

We are all born with instinctual behaviors that must be socialized. We have natural inclinations to take what we can get for ourselves, to lash out at another person when they hurt us, and put our own desires before those of others. The process of education should be both a process of learning facts, and learning how to live responsibly with one another. A society whose schools fail to teach the basic virtues of resilience, tolerance, and seeing from the viewpoint of others, fail to teach children the necessary skills to be good citizens in a democracy. In fact, democracy cannot exist without such citizens. Anti-bully policies are thus anti-democratic.

Anti-bully legislation often crosses the boundary between a physical crime and emotional hurt. Laws are made to punish crime, but in a pluralistic society, the First Amendment protections of freedom of speech are required for people to be able to live with others who believe differently and say things that cause them emotional pain. Without this distinction a society becomes totalitarian, where the government tells everyone what they can or cannot say, and nobody is allowed to tell the government anything different. In fact, much behavior labeled as bully behavior is very normal. Just look at the rhetoric used in political campaigns, or by stand-up comedians. Should we make children criminals when they imitate non-criminal adult behavior?

Many teachers and school counselors are becoming frustrated by politicians and activists who are increasingly making their job of education difficult by promoting anti-bully legislation that serve their own interests rather than the children they say they want to help. But, from my viewpoint these well-meaning policymakers are acting like bullies themselves, hamstringing those who are charged with child education and forcing them to become policemen rather than teachers and nurturers.

For those who want to learn more about how seriously counterproductive much of our anti-bully legislation is, I would refer you to the following:
1. Bully Nation: Why America’s Approach to Childhood Aggression is Bad for Everyone by Susan Eva Porter, Ph.D., a school pscychologist with over 20 years of experience.
2. Izzy Kalman’s review of Sue Porter’s book on his Psychology Today blog.
3. Izzy Kalman’s website Bullies2Buddies.com