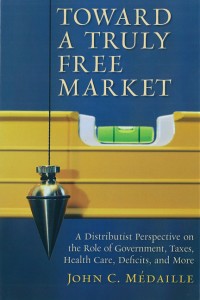 Toward a Truly Free Market

Toward a Truly Free Market: A Distributist Perspective on the Role of Government, Taxes, Health Care, Deficits, and More by John C. Medaille (ISI Books, Wilmington, Delaware, 2010) is a genuine contribution to the discussion of how to fix the United States economy. The author is a Catholic economist who has arrived at many of the same conclusions that I developed last year in Life, Liberty, and the Pursuit of Happiness, Version 4.0, particularly the necessity of repealing the federal income tax and structuring society around the principle of subsidiarity. It was very refreshing to read this independent scholarship based on genuine economic research rather than the failed economic theories promoted by large corporations, political parties, and other special interest groups.

The value of this book is its insight into economic reasons for the impending bankruptcy of the United States economic system and the inability of either laissez-faire capitalism or Keynesian government intrusiveness to create a sustainable economic system. He explains how these theories inevitably lead to unsustainable debt and inflation, and how they lead to the creation of a servile society.

He explains clearly how externalities to the supply and demand curve—land, money, and labor—are not properly accounted for in contemporary economic theory. This lacuna leads to a failure to understand and critique the problems of economic rent that creates consolidated wealth without work at the expense of those who work and deserve the fruits of their labor. The solution, then, is to reverse the theories of taxation that taxes capital and work, and rather tax economic rent.

One must be careful in trying to digest the author’s use of economic terms as definition of “capitalism” refers to specific prevailing theories promoted by large financial institutions rather than a more general notion of the use of capital to create goods in a free market, which would also apply to his own theory of “distributism.” He refers to distributism as rooted in a concept of justice based on desert, rather than a redistributist (socialist) concept of equal division of spoils.

In the end, Medaille’s view of the economy is as a component of society, which is a system of interrelated parts, which is a key point I developed in my own book. These two books complement one another as I explain how the government laws and structure were changed and need to be fixed, while Medaille gives an account of the economic outcome of those changes. Both of us promote evolutionary reform, not revolution. Both of us promote devolution of government to lower levels (which the Russians and Chinese are doing having learned from their socialist mistakes) and this includes placing taxation at lower levels of government.

Medaille makes a good case for ending federal income tax and abolishing the Federal Reserve and offers alternatives that would cause greater efficiency of government and greater economic justice. He makes a good argument against “Cap and Trade,” which he considers “a right to pollute.” Following Henry George, he makes a case for taxing land but not the improvements, a suggestion I also had made.

This book should be a “must read” for anyone interested in reforming the United States system of government and creating a society where people can freely pursue life, liberty, and happiness.