↓
Home→Articles→Economics→Solyndra and Foreclosure Rentals: When the Referee Becomes a Player 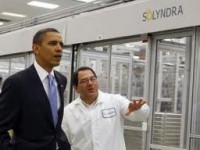 Its easy for politicians to believe promises of lobbyists.

When a referee of a football game starts choosing sides he gets fired, and Washington’s attempt to become a player rather than a referee in the U.S. economy should cause the same outrage as we would see against a football referee choosing sides. The Solyndra scandal shows how easy it is for governments to back the wrong horse when attempting to become a player, wasting millions of taxpayer dollars and creating unviable jobs when market forces are defied. The entry of the government into the rental market after it foolishly backed private home mortgages is another example of government destruction of the economy when it becomes a player.

The proper role of government vis-a-vis the economy is that of referee, not a player. Government, by its very nature, creates and enforces rule of law. The basic principle underlying governance is power. However, the basic principle that underlies an economy is the market. A market is governed by the principles of production and exchange. These are not the principles that drive a government.

What is legal and what is on the market are almost never the same. A market is determined by products available to sell that people want to buy. When a government gets involved, it produces what lobbyists want to sell it, or what it thinks the people want, and this is almost never what the people want. To the extent a government responds to people’s desires, the time-frame can be years, if at all, while a market can respond in a matter of days or months.

Try to imagine for a minute that all the players on NFL football are fired, the referees become the players, and there are no referees but they play by rules they make up as they go along. This is the situation that has developed in the US economy. And, it is just as disastrous.

Referees are people who know rules and apply penalties when a player violates a rule. They are generally not as physically strong, fast, or adept as the players. In fact many of them might make poor players. However, they have the ability to “throw a game” by choosing to side with a team, and they can be tempted to do this through bribes.

Solyndra is an example of government trying to force its will on the market, both through bribes, and through a naive idealism about how the world should be that causes them to lose sight of their true role as a referee and not a player. The failure of Solyndra is similar the failures of many state-sponsored businesses in the Soviet Union. It is the result of the attempt to try to create an economy through force. In the past, many kings and feudal lords tried to do the same thing with their power.

However, the basis of modern economic growth is a market in which all citizens, not just a few elites are the players, and the government, through rule of law protects private property. The protection of private property is the foundation stone for a citizen to be willing to produce, for if he produces and sells something he is able to keep the fruit of his labors. No one will spend a lot of time producing something if someone else plans to use power to take it, destroy it, or redistribute it.

The U.S. Constitution provided such protections that allowed for the economic growth that enabled the U.S. to become a great power. Now that power has gone to its head, founding principles abandoned, and the referee has become a player causing the economy to crumble.

Imagine the referee of a football game, saying that if he set Adrian Peterson on the sidelines, and played in his place we would have a more fair and just game. This is exactly what the US government did when it decided to back home mortgages. This backing destroyed the incentive to properly vet the ability of potential borrowers to repay loans. And of course once the referee becomes a player, there is no one regulating him, because he holds ultimate power.

Adherence to the principle of separation of the political and economic spheres is essential for economic development and job creation. Both the Bush and Obama administrations–and the Congresses that served simultaneously–have wantonly disregarded this core principle of economic development. President Obama’s proposed “jobs bill” seen in light of this principle is actually an “anti-jobs bill,” even though it may be touted as a jobs bill.

In Life, Liberty, and the Pursuit of Happiness, Version 4.0, I wrote about the three main spheres of society—government, culture, and economy—and our need to view them as social organs that each play a role in the overall society, and are each governed by a different principle—force, love, and the market. The havoc government wreaks on the economy by trying to be a player is similar to the havoc a government wreaks on a culture when it tries to impose an official truth, like communist doctrine, on an entire society. Both misuses of force cause social stagnation and collapse.