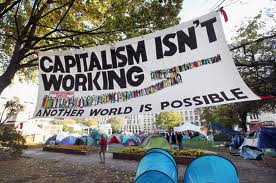 Protests Against Capitalism Often Fail to Understand It

Today I was referred to an article in The Times (London) by Matt Ridley titled “Yes, capitalism failed. It’s just too cosy.” What Ridley was criticizing is the “crony capitalism” that reflects our current economic systems in the US and Europe. The Solyndra failure and the housing bubble are archetypical examples of the failure of crony capitalism, where politics and capital investment are too cozy.

Such economic distinctions are necessary. General public discourse about economics is so full of stereotypes it is hardly possible to talk about “capitalism.” There are many definitions. I tend to understand its definition as Merriam has defined it:

This definition provides no role at all for government. It portrays an economic system whose component parts: investment, production,  ownership, and markets are all operating in the private sphere. It also describes the economic system that has generated innovations and conveniences for modern society that enable people to live longer and happier than in societies than where governments control capital, set prices, and allot enough capital to people to live as serfs.

But, “capitalism,” as it is so defined, has failed. It has failed because without government enforcing rules governing consolidation of economic power, conflict of interest, monopoly, and other undesirable economic behavior, you end up with dog-eat-dog, survival of the fittest, economic conquests, kickbacks, and paybacks. An economic system without rules destroys free markets, establishes crony capitalism, creates banks too big to fail, and leads to huge disparities in wealth, in which in many cases the wealthy are not the producers of the goods and services that make people happy—they are the controllers of capital.

The simplistic reaction to these unwanted developments of a capitalist economic system is socialism or communism, where leaders of political movements prey on the poverty of the masses by promoting envy and then promising that they, or the government, are better controllers of capital than current capitalists. They advocate the nationalization of capital, which already proved a failure in other forms of society where governments controlled capital, and more recently the failures of Russia and China after they fell victim to such simplistic economic rhetoric.

A sound social system cannot expect a “new man,” free from sin and greed, to emerge from the ranks of masses—particularly envious masses. History has proven the principle that unchecked power corrupts, and that politicians do a poorer job in allocating capital than markets. The main mistake of contemporary society is pitting unrefereed capitalism against socialism, saying that society must accept one or the other of two failed systems.

Those who have followed my blog or read my book, Life, Liberty, and the Pursuit of Happiness, Version 4.0, know that I believe the answers lie in a rule of law in which governments are referees, not regulators. There is a huge difference between a referee who enforces fair rule of law and a regulator who uses arbitrary power to steer the flow of capital. Referees are impartial and do not have a stake in the outcome of the game. Regulators, at least in our present system of crony capitalism, are often players who benefit from one side winning.

When governments tax bad economic behavior, they become economic players rather than referees, with the taxing authority becoming a form of business that itself is poorly regulated. When this happens, governments behave with the same economic incentives that led to the problems in the first place. Police create speed traps designed to bring small towns money. Taxes on electric power monopolies cause governments to view off-the-grid power with hostility. Governments then engage in unfair economic competition against their own citizens.

Finding the Economic Equivalent of the US Constitution

The US Constitution was designed to do for political power, what also needs to be done for economic power. The concept of the US Constitution was to created a system of equal freedom, where equal political power was distributed to all voters. Each vote represented one share of political power. And, while this political arrangement has been largely undermined by factions and interests as I outlined in my book, it was a system that allowed capitalism in its present form to flourish until it turned into the economic equivalent of feudalism.

The next step—Life, Liberty, and the Pursuit of Happiness, Version 4.0—would be a rule of law in which the intent was to disperse economic power in a manner parallel to how the US Founders attempted to distribute political power. Some of the same underlying principles that were employed to bridle the abuse of political power can be applied to the abuse of economic power–particularly the avoidance of “faction” or corporate blocks, and the strict avoidance of conflicts of interest.

The Citigroup-Travelers merger of 1999 is a primary example of crony capitalism undoing conflict-of-interest legislation (the Glass-Steagall Act) that served such a constitutional purpose. The repeal legislation, created by a Republican Congress and signed by a Democratic President, was an example of crony capitalism that opened to door to the scandals of Enron and WorldCom and other companies in the next few years. And, the Sarbanes-Oxley legislation was a crony-capitalist solution to problem that penalized smaller companies with the burden excessive accounting legislation, thereby stifling economic competition except among the large economic fiefdoms that could afford the accountants.

It is as difficult for “capitalists” who control such fiefdoms to allow the distribution of economic power and opportunity, as it was for King George III to allow the distribution of political power to colonial settlers. Such capitalists purposely confuse refereeing with regulation to keep their economic advantage. It is in their interest to promote ideological libertarianism on the one hand while seeking to control government regulatory agencies on the other.

The anti-capitalists, ironically, advocate a return to government control of capital. A move that returns them to economic inefficiency and exploitation by elites with power. The Soviet Union and Maoist China are recent examples. Neither system stimulated creativity or production. Capitalism, on the other hand, leads to the production of desirable goods and services, but when unconstrained within a principled framework degenerates into oligopoly or crony capitalism.

Thus, neither the laissez-faire capitalists or the anti-capitalists are advocating solutions that lead to prosperity and economic justice. If you “follow the money” neither group wants to be refereed, but is advocating an ideology that sounds noble but provides a way for them to control capital by force of law. The one by economic monopoly and the other by government ownership.

By designing a constitution that refereed political power, the Founding Fathers of the US created a system of governance that enabled economic power to arise in an independent economic sector. Now it is time to referee this new sector of society (not regulate it) in the manner of providing checks and balances and an mechanisms that naturally distribute capital through voluntary market forces.

I will close with one of my favorite quotes from Frederich Hayek:

Imagine the role of a referee in a football game. Rules need to be planned to encourage fair competition. Referees can not take money from players or teams, nor can they become players and assert rules that enable themselves to win (as do people with unchecked power). Such games would be considered a joke. However, that’s basically what crony capitalism is.