These goals are rooted in the nature human beings as drives that are biologically programmed and in nurture through culture. However, nurture cannot erase or change basic biological programming, only add, modify, or build upon it. Thus children that initially begin self-focused and fight and steal each others’ toys in the sandbox, can learn to share and work together. However, their basic physical drives are not eliminated, but regulated or sublimated by culture.

It is naive to believe, for example as Marxism-Leninism taught, that a socialist society would be able to create a “new man” that would not be governed by the desire to improve his lot in life, and that the profit motive or competition over resources characteristic of “capitalism” would disappear under Marxist-Leninist culture. From the Russian revolution until the collapse of the Soviet Union, communism in Russia was characterized by contests for power and the use of the Party to improve one’s life. Eventually a new class, coined the nomenklatura, evolved, rather than a “new man.” Human nature did not change.

Planning for Profit
Profit is normally defined as gain from business, investment or other financial activity. But it can be more broadly defined to include sale of one’s labor through employment. This includes sale of one’s labor as a worker in a business, a government office, or another social institution such as a church or non-profit corporation. In this broader sense, members of labor unions, leaders of labor unions, owners of businesses, and employees of government are all human beings who seek to profit from their work so that they might improve their life. In this desire for profit, capitalists and laborers do not differ.

All human economic enterprise seeks a profit in normal market conditions. From profit, one can freely buy goods and services in the pursuit of happiness. Without the possibility of profit, it is not rational to produce, sell, or work. Businesses traditionally planned for profit, and the protection of the fruits of one’s labor–the protection of private property–was considered sacrosanct by John Locke and the American Founders. Laws that protected the profits from economic enterprises were one of the main reasons the United States grew and prospered. People were able to plan for profit and know that if they made a profit, it would be secure.

The situation can be compared to building a house. If there are no rules or system of justice to protect your house, and a gang can kick you out and take it over, you will not have an incentive to build the house. It doesn’t matter what type of a person your are, a pastor, a carpenter, a welfare recipient, or a prince. If you have no confidence that you can keep your house, that no one will be able to protect your ownership, you will not build it.

Government Planning for Profit
Governments are tempted to plan for profit, just like any other enterprise. While it is their function to protect the property–and profits–of citizens, governments will tax in order to produce a profit if they are allowed. And, they have the force of law behind them to expropriate money and property if there are insufficient checks on that power.

Bureaucracies are particularly dangerous over the long term because each department head wants a guaranteed cost of living increase and retirement security, in addition to additional staff that will “need” the same benefits.  This results from their own desire to profit from their labor. In the early stages of development a bureaucracy seems rather innocuous because it may be a small burden and accomplish a social good. But, unchecked, bureaucracies exhibit a pattern of growth based upon incremental increases backed by the power to expropriate by force.

The end result of government planning for profit is that government competes with its own citizens, and eventually defeats them because it has the unfair advantage of force. The recent implementation of government-sponsored lotteries and casinos is an example of for-profit government activity that overtly encourages and preys on citizen’s hope to get rich without producing actual economic goods or services. Such actions undermine a society’s economy.

It was not the tyrannical efficiency of Stalin, with slave labor, gulags, induced famines, forced relocation of ethic groups that brought the Soviet Union to its knees. On the contrary, it was the systematic inefficiency of government run by the uncontrolled bureaucracy that began with Khrushchev and dramatically expanded under Brezhnev. It was the rise of the nomenklatura and the formation of a bureaucratic class with government departments that promised to fulfill all social needs that increasingly rationed all services while creating a more luxurious life for itself that eventually bankrupted the society. 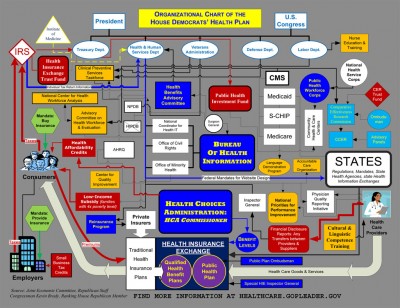 This bureaucratic expansion is not just in health care, but in every area of life that was intended by the American Founders to be the responsibility of the citizens in their own pursuit of life, liberty, and happiness. “Rent seeking behavior” is a term coined by economists to describe the psychology of bureaucrats planning for profit. They seek some income for themselves by telling people they will do something for them that they cannot do themselves.

However, money does not grow on trees and bureaucracies can only consume and redistribute. When they undercut the economic foundation upon which they ultimately depend, they are like the proverbial man who cuts off the branch he is hanging on. Yet, because of the very nature of bureaucracy and economic laws, they can do no other.

The rationale behind a market economy is that people will do things for others that they can’t as efficiently do themselves. When they do this in the market and compete, they get a much lower cost than if a non-competitive arm of the government provides the service. Providing a service, like a state lottery, is nothing more than a bureaucratic smokescreen for giving someone who runs the lottery a non-competitive advantage. It is using the power of government to gain a monopoly in something a market can do better.

Planning for Competition
The role of government and bureaucracy has to be seen as something different from the profit motive and the true owners of government, the people, have to give bureaucracies their marching orders and tell them what they will get paid for marching. They cannot let lobbyists for government departments and advocates for new programs defraud them out of tax dollars. Dominion has to be reversed.

In a “state of nature” unregulated competition ends up with the biggest and strongest winning and dominating everyone else–thus eliminating competition. This was Hobbes’ basic assumption that underlies modern political philosophy. The role of government is to create a social order in which the domination of others is prevented, and the liberties of all are secured.

It doesn’t matter whether we are talking about physical power, economic power, or knowledge power. In the “state of nature” people will seek to consolidate and control power to their advantage over others unless a government can be created to protect the individual pursuit of life, liberty, and happiness.

The role of a good government is to protect the right of each person to acquire the physical, economic, and knowledge power to achieve his or her own ends. The bad government will use its force to extract the property or power of an individual and to put it to the use of another person’s ends.

This can only take place when no group, whether it be racial, ethnic, religious, or a select bureaucratic department has a monopoly over a citizen’s political, economic, or knowledge power. In the end government legitimacy requires the virtual end of all special interest legislation, which has become the norm rather than the exception for America’s governments.

What is the role of government in the economic sphere? It is planning for competition, rather than its present practice of planning against it.

Neither right nor left, but real liberalism
Our present two political parties both serve the cause of profit. They represent two cartels fighting over the control of government. On the right, despite promoting the rhetoric of freedom and limited government, the Republicans are a consortium of the strongest business lobbies aimed at consolidating economic power with the help of the government. On the left, the Democrats, despite promoting the rhetoric of justice and equal opportunity, is a consortium of interests that want to use government to redistribute the income derived from economic productivity for rent-seeking ends.

Neither party represents the genuine American ideals of protecting all citizen’s in their pursuit of life, liberty, and happiness. There contest is not much different in quality than the contest between Hutus and Tutsis over the control of the Rwandan government. Both parties are represented by powers that arose and consolidated as a result of the undermining of the intent of the framers of the Constitution. They are the result of unbridled pursuit of profit at the expense of fair competition.

Our present system of government, including our executive, legislative, and judicial branches, have been complicit in the creation of this clash of Titans that leaves citizens to “free” to choose sides between these two evils. There is another way. It does not lie on a spectrum somewhere in the middle between these two evils. Rather is it a third point above that line where the ideal of justice and liberty can genuinely meet without being co-opted by one of our present profit-seeking cartels. It is a platform in which government “plans for competition.”

Conclusion
The role of economic enterprise is to plan for profit. The role of government is to govern that pursuit so that everyone can freely pursue their own life, liberty, and happiness without harming others. In a society of planned competition, pension funds based on Wall Street profits might disappear, for in a situation of free competition high profits are unsustainable. If someone is making a large profit from an activity, others will enter the market willing to accept a lower profit. This cycle occurs until profit is reduced to what one needs to live, and below which the pursuit would not be worthwhile.

This latter situation, a world in which many farmers, artisans, and shopkeepers of relatively equal power compete with one another was the world of Thomas Jefferson and Adam Smith. It was a world in which the “invisible hand” was able to conduct its magic. There is no such invisible hand in a world of cartels, as the number of players constantly shrinks, forcing the majority to choose sides. Such a life is not real freedom, but an illusion of freedom, and iron cage of freedom between two non-viable alternatives.

If the Founding Fathers deserve an “A” for their plan for life, liberty, and the pursuit of happiness, the present system deserves an “F.” For it has become a contest between cartels who seek to feed off citizens’ desire to pursue life, liberty, and happiness, while using the government to drain them of their life-blood. The original system has, over the period of 200 years, been stood on its head.