The Office of the Special Inspector General for the Troubled Asset Relief Program (“SIGTARP”) seems as frustrated with TARP as middle-class Americans. It’s recently released its Quarterly Report to Congress has concluded:

Even if TARP saved our financial system from driving off a cliff back in 2008, absent meaningful reform, we are still driving on the same winding mountain road, but this time in a faster car. 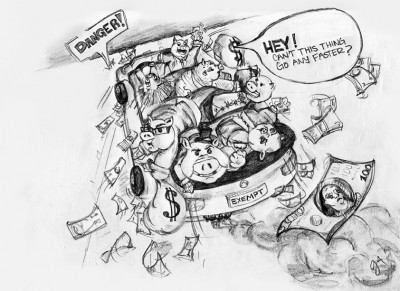 The report concluded that the costs of TARP “will have been for naught if we do nothing to correct the fundamental problems in our financial system and end up in a similar or even greater crisis in two, or five, or ten years’ time.”

So far TARP has manage to accomplish the following:

What Does SIGTARP Recommend?

SIGTARP offers some hope that reform can still come from this program.

In short, the government has failed to act on basic recommendations of SIGTARP that could lead to needed reforms of the financial sector. It is a missed opportunity, but it is still not too late to implement these reforms and pull the U.S. economy out of the sewer the financial institutions are sending it down.

Of course, TARP itself is not a solution to the problems of job loss caused by an unlevel  economic playing field that the government could do much to improve, as discussed in my previous blog article. However, the financial sector is part of the US infrastructure that can either be a strong girder or a rotting timber for those people engaged in sound business. Changes in corporate tax policies, personal income taxes, taxes on imports, and tort reform all need to be made to create a climate more favorable to production of goods in the United States, even if global wages may not be leveled. U.S. ingenuity and efficiency can still offset large wage discrepancies if the government would simply allow more fair competition to take place in the United States.