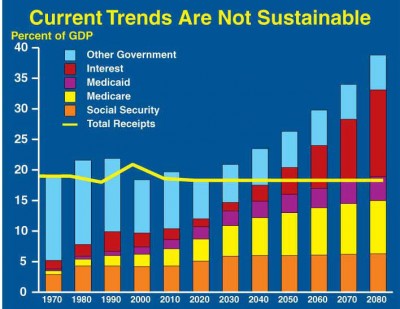 You take a small amount of money from the first person, promising a greater amount in return. Then you charge a larger amount from the next person and pay off the first person with his greater return. Next you charge a third person a higher amount and pay off the second with a greater return. You do this until the last person in the chain is unable to pay and the bubble bursts.

The U.S. Social Security system uses a combination of these two schemes. When Social Security was introduced in 1935, a 1 percent tax on income was levied. The payments of eight workers were used to support one recipient. Today just a little over two workers are available to support one retiree. The government has offset this decline by gradually raising the tax to 12.4 percent.

Medicare is a variation on the ponzi scheme because it promises to cover all the medical expenses that are considered necessary, and with the increase in the cost of healthcare and the variety of new treatments available to help people live longer, we have ever-increasing numbers of people using ever-increasing numbers of services. Again, the taxes must be raised each year to cover this debt.

Worse yet, the tax increases have not kept up with payments, so another type of ponzi scheme has been employed based on borrowing ever greater amounts of money to cover a Federal Deficit. This scheme adds increasing tax burdens to future generations that must repay both principle and interest on the debt in addition to having their Social Security and Medicare taxes continually increased.

These government ponzi schemes are destined to collapse here, as they did in the Soviet Union. This will occur sometime before 2040, depending on the strength of the U.S. economy and employment. Not fixing entitlement schemes might lead to the fulfillment of doomsday prophecies for the year 2012 here in the US.