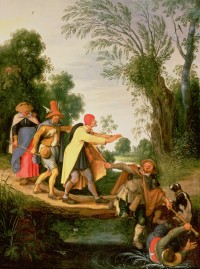 The metaphor “the blind leading the blind” comes from ancient wisdom and is an apt metaphor for Western politics and higher education today. Not that there aren’t very smart and shrewd politicians or many new discoveries in the sciences. But, when it comes to knowledge of where we want to go and how to get there, our culture is full of statements and policies that reflect the ancient metaphor taught in the Bible, the Upanishads, and Roman Classics that complain of the blind leading the blind.  Sextus Empiricus (160-210 a.d.) wrote in Outlines of Scepticism: “Nor does the non-expert teach the non-expert—any more than the blind can lead the blind.”

This saying is just one example of pertinent ancient wisdom discarded in the twentieth century by a rejection of conventional wisdom that followed the rise in faith in modern science and the nation state. This modern faith in science and the state became a basis for the rejection of religion as superstition and an opiate, and the idea that the principles informing the U.S. Constitution could be rejected on the basis that it was “the philosophy of dead white men,” and in this age of pluralism, everyone’s cultural views were as valid as everyone else’s.

Discarding inherited culture and a turn to reliance on new science and the state can be compared to discarding one of our capabilities, like sight, while emphasizing another, like reason. We can compare the contemporary political situation of majority opinion rules to a group of people in the middle of a large forest that has rejected the map drawn by earlier explorers because it contained some imperfections. Such a group is likely to never get out of the woods.

Inherited wisdom emphasized personal responsibility, virtue, civil behavior, and requirements of citizenship, as well as technical performance and job skills. In our technological age, job skills is the only one of these qualities emphasized by society. Universities, instead of teaching the traditional liberal arts and history, focus on education for jobs. But “jobs” involve work for other people, not the mastery of one’s own life. We can take pride in being a great surgeon, a brilliant mathematician, or a skillful lawyer. But these skills will not help people escape drug addition, divorce, or personal bankruptcy. They do not give us a road map for the pursuit of happiness.

A road map for personal happiness and success is traditionally conveyed through language, the teachings of the world’s great civilizations, and a personal education learned from parents, community, and schools that instills habits of personal responsibility, the lessons about society learned through history, and the ability the think critically about the knowledge we inherited. Our present culture understands that to excel in physical science one must learn mathematics and the scientific theories bestowed by our predecessors like Pythagoras, Newton, and Einstein. Yet when it comes to politics, we imagine we can forget the political science of Aristotle, Cicero, Hobbes, Montesquieu, and Jefferson that understands the desire to misuse power and to persuade voters to reject traditional principles in the name of bringing them happiness. Certainly the charades of modern political parties, both Republican and Democrat, depend on citizen ignorance of the lessons of history.

Unfortunately many of today’s political leaders grew up without learning the lessons of history in families or schools. Many representatives who pass laws cannot recite the Constitution, nor do they feel compelled to balance a state budget. These leaders were educated as lawyers or other professionals who were trained in modern universities that emphasized job skills. “Jobs,” by definition, are skills learned to work for another person, or within an existing system. They have little to do with the traditional leadership wisdom bequeathed by religions and the liberal arts, which are roundly rejected by contemporary society and the media. As we disconnect from the inherited social habits and virtues bequeathed by social tradition, we begin to increasingly become like children being raised by children.

Today there are areas of inner cities that provide clear illustrations of the societies devoid of traditional upbringing, where children have been literally raising children with the assistance of government welfare instead of parents and communities that can instill life skills and virtue. Minneapolis Mayor R.T. Rybak has been recently named chief executive of Generation Next, an organization dedicated to closing the achievement gap in education. In a 2007 discussion, he argued that that a core problem is “children rasing children”:

That is something that the city council and I wrestle with constantly. I distill down this very complicated issue to one key sentence: There are too many kids raising themselves, and too many kids having kids of their own. We’re moving in the right direction on teenage pregnancy, but because of the tinderbox into which child parents are bringing babies, every one of those kids is very, very vulnerable. We have too many kids making decisions that are incredibly violent when they’re very young. –“A Kitchen Table Conversation about Minneapolis and Its Future,” Peter Bell, Gary Cunningham, R.T. Rybak, July 12, 2007

Lord of the Flies is a classic literary work envisioning a society created by the children who have been disconnected from the life patterns and wisdom of their parents and the civilization into which they were born. Modern politics increasingly resembles a similar disconnection from the traditional restraints on power and the political subsidiarity associated with personal responsibility. Public schools, promoting diversity and pluralism, fail to teach the lessons learned from history out of fear they will offend someone. There is a modern myth believed by many that the state can provide food, housing, and healthcare for all in a society that does not promote rewards for virtue, saving, and self-responsibility. When positions of power are acquired through financial contributions, backhand deals, and false promises clothed in beautiful rhetoric, and those with genuine leadership skills automatically excluded in the process, society devolves into a system of the blind leading the blind.

Great civilizations have arisen on backs of those who recognize that the people are being led by the blind. Socrates gave his life for prodding the Greeks to examine their beliefs and political rhetoric. In Matthew, Jesus irritated the religious leaders of his day when he referred to them as “blind guides:”

He replied, “Every plant that my heavenly Father has not planted will be pulled up by the roots. Leave them; they are blind guides [of the blind]. If a blind man leads a blind man, both will fall into a pit.” — Matthew 15:13-14, New International Version

Sextus Empiricus’ statement, “Nor does the non-expert teach the non-expert–any more than the blind can lead the blind,” came during the corruption and collapse of the Roman Empire as non-experts were put positions of responsibility as rewards for political loyalty rather than a genuine ability to guide. The U.S. is in many ways comparable to the Roman Empire and has been undergoing a similar course of decline, largely because it has become disconnected from the lifestyles and life skills of those who enabled it to prosper.

One problem, of course, is that just as in ancient Athens, Israel, and Rome, when the blind are in leadership positions they use force to suppress those who would question their policies. Edward Snowden was the victim of such a reaction as have been other government transparency advocates. I wrote Life, Liberty, and the Pursuit of Happiness, Version 4.0 in an attempt to explain sound principles of governance that could be applied to reverse the decline of the U.S. system of governance. We cannot expect political leaders or political parties to support such principles any more than we could expect children to balance their parent’s checkbooks. The phrases “the blind leading the blind” and “children raising children” are both apt descriptions of contemporary state governance in which policies are made by party interests that are both blind to national happiness and unaware of the principles and virtues required to achieve it.