↓
Home→Articles→A Glimpse at the Coming Death Panels in the U.S.A. 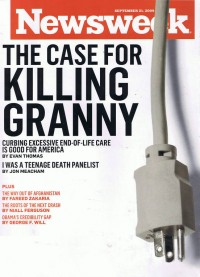 We all knew that the Affordable Health Care Act, popularly known as Obamacare, would lead to lead to rationing. Shortly after Barack Obama became President, he and Nancy Pelosi began promoting such reforms–to redistribute a shrinking pie more equitably. Instead of doctors and patients, or even insurance companies, deciding who would receive medical care, when they would receive it, and how much they would receive, there will now be 160 panels of bureaucrats whose primary mission is to reduce health care costs to the government.

As 2014 approaches, what Sarah Palin called “death panels” are starting to take shape. In this recorded interview with Mark Levin, Jeff, a neurosurgeon, describes what it will mean for his profession.

“If someone over 70 years old has a bleed on the brain in the middle of the night, I have to wait for a panel in Washington to tell me whether I can operate…. I’ve been 9 years in medical school and 10 years in training and now I’ve got people who don’t know a thing about what I am doing telling me when I can or cannot operate.” Without special permission to operate, the new prescription for a bleed on the brain for people over 70 years of age will be “comfort care.” Such decisions will not be determined by a doctor’s evaluation of whether a surgery would provide the patient with many more years of a high quality life; they will be a death sentence.

As with the incremental raising of taxes, rational and impersonal governments incrementally reduce services. If they feel the need to reduce the health budget further, they will change the definition of a “long-enough life” from 70 years of age to 65 years of age. We have seen this in the incremental raising of the full retirement age for social security from 65 years to 70 years. Governments do this because they are made up of human beings who want to increase their income each year, just as people employed by businesses do. The only way bureaucrats have to improve their own welfare, is to do so at the expense of those they are supposed to serve. This is not the case in productive businesses, because they can produce and sell more products and increase the welfare of employees without forcing other people to sacrifice. It is the difference between redistributing a limited pie, or making a bigger pie. Rationing happened in Germany, in Russia, and the United States. It is less a matter of ideology, than the nature of bureaucratic social organization.

This is an example of when the economic and political spheres dominate the cultural sphere, rather than when society is integral.The concept of “Affordable Health Care” did not mean more affordable for American citizens, but more affordable for the government. The solution? Less health care. In Rome, from 150-400 a.d., great population decline accompanied the consolidation of the economy under feudal lords. The children of Rome’s vibrant middle classes became serfs, whose only way out was “to marry the handsome prince.” Obamacare is a part of a similar transformation going on in the United States today, only the feudal lords will not be property owners as much as industrial lords and bankers, who will eventually lay off all the unnecessary federal workers, as the banks have begun to do in Europe with their appointment of Greek and Italian presidents.

If the healthcare decision were left to a king, he would subjectively decide who lives and dies based on how valuable the patient was to him. If the decision were made by a doctor, he would obey the Hippocratic Oath and do what he could for the patient to live, whatever the cost. If the power is in the hands of a rational bureaucracy, rationing is the normal outcome. If the government were to follow the principle of subsidiarity (the greatest responsibility to the lowest possible level), then the decision could be left to communities of people who had face-to-face relationships with the person–they would know him by name, not as a “unit.” Of course, being human themselves, the death panels will make exceptions for themselves, for those they personally know, or those they feel are valuable to society. The system is ripe for cronyism.

This is an example of the nature of a bureaucracy depersonalizing human  beings, turning them into a statistical unit. I described this process in greater detail in my book Life, Liberty, and the Pursuit of Happiness, Version 4.0 in the chapter “The Principle of Subsidiarity.” This principle, an essential feature of good governance, is being blatantly violated by the fraudulent rhetoric of those who promise health care they know they will never deliver, but it creates more federal jobs for cronies at the expense of citizens.

It would be good to reassert the label of “citizen,” which implies political sovereignty, rather than referring to people as objects for the manipulation of others: “units,” “consumers,” or even “voters.” All such terms dehumanize people by making them items for statistical analysis, the way any bureaucracy–whether in a government or an insurance company–will operate.